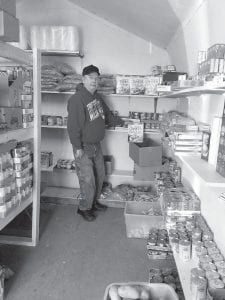 FOOD PANTRY — David Little is shown in God’s Food Pantry in Jenkins, which he operates.

“I knew there were a lot of needy families in our community and I wanted to help,” said David Little as he restocked the shelves in his tiny food pantry in Jenkins. “I prayed a lot about it and I felt that God was telling me to go ahead and get started and He would help me find a way. There were two major obstacles. The first was how could I get funding and the second was how could I get a facility for an outlet.

“I had a small woodworking hobby shop in my yard which measures only 12 feet by 16 feet so I emptied it and renovated the interior and built shelving and a new set of steps to the entrance,” Little reminisced. “I talked to anyone who would listen to me about the project and several friends and neighbors committed to help. We then organized a couple three-day fundraisers selling hotdogs, barbeque sandwiches and fried apple pies. The manager of the Jenkins IGA Store allowed us to set up a food trailer in his parking lot. With profits from the sale and donations we generated over $1,000. I knew my prayers were being answered.

“On March 17 , we will begin our second year and we have never run out of food,” said Little, smiling proudly. “The word about our project spread rapidly and several generous individuals and organizations have given cash donations and loads of food items. To date there have been over 2,000 visits to our food pantry. It is not unusual to serve five or 10 visitors in a day. I try to accommodate anyone who calls, but I do limit them to one visit per month. I am especially busy toward the end of the month when people’s income and groceries run low.”

Little said he has a good working relationship with several merchants and organizations and buys a lot of groceries in bulk and on sale to get the most from the available money. Frequently people show up at the food pantry with a box of groceries to donate or give him a handshake with some money and a friendly smile saying, “I want to help too”.

This year’s first fundraiser will be April 1-3 on a Wednesday, Thursday and Friday at the Jenkins IGA Store parking lot. The food pantry will be selling hotdogs and barbeque sandwiches made from Little’s secret recipes from 10 a.m. to 6 p.m. daily.