GOING BACK TO WHERE IT ALL BEGAN (SORT OF) 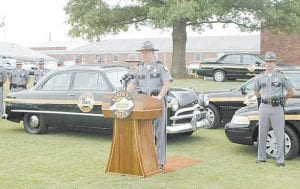 Kentucky State Police Commissioner Rodney Brewer on Tuesday officially unveiled 17 limited-edition “retro-look” cruisers that will be used across the state during the next year. The vehicles feature the same color scheme and decals used by the police agency when it was created in 1948. Behind Brewer is an actual 1948 police car. The specially-painted

modern cruisers are designed in honor of the KSP’s 60th anniversary. See related story inside.