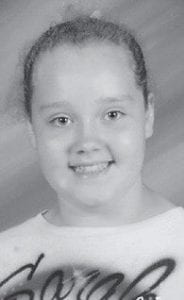 Sarah Danielle Collins placed in the top six in the Broadcast Announcing category of the KHSSL Upper Kentucky River Regional Speech tournament in February. She will advance to state competition March 20 and 21. She is a fifth-grade student at Arlie Boggs Elementary School and is the daughter of Harry Gerrard Collins II and Darlene Collins. Her grandparents are Gerrard and Lynda Collins of Whitesburg, and Daryel and Geraldine Banks of Annville. She has also advanced to Regional Governor’s Cup academic competition in language arts and written composition.