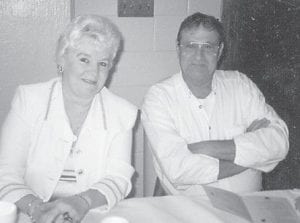 The children of Alben and JoElla (Martin) Watts announce their parents’ 50th wedding anniversary. The couple were married August 11, 1959 in Jackson and have three children, Sarah Watts Combs, Sandra Watts Austin, and Alben B. Watts II, and three grandchildren, Jackson Barkley Austin, Samantha Jo Austin, and the late Jonathan Barkley Combs. Alben Watts is retired from South East Coal Company and his wife is a retired teacher from the Letcher County School System. They enjoy traveling and she works with at-risk students while he enjoys gardening. Both are very involved in civic clubs. A reception will be given in their honor from 3 to 6 p.m. on August 15 at the Harry M. Caudill Memorial Library in Whitesburg. Refreshments will be served.