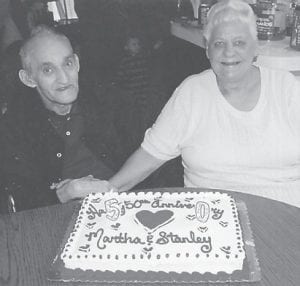 GOLDEN ANNIVERSARY — Stanley and Martha Hughes celebrated their 50th wedding anniversary on Oct. 5 at their home in Deane. He is a retired coal miner and she is a homemaker. Celebrating with them were their children, grandchildren, and great-grandchildren. They are the parents of Darlene Mobley, Danny Hughes, Keith Hughes, the late Leslie Hughes, and the late Stanley ‘Tater Bug’ Hughes, and have nine grandchildren.