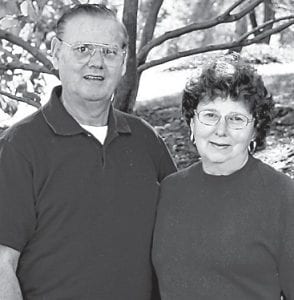 GOLDEN ANNIVERSARY — Mr. and Mrs. Frank Perry of Whitesburg will celebrate their 50th wedding anniversary on Thursday, December 23. The couple were married in Whitesburg on December 23,1960. He retired after working many years at the old A&P store and the Bank of Whitesburg. She retired after 32 years with Kentucky Power Company. They are the parents of two children, Lynn Perry Cutright of Mt. Juliet, Tenn., and Chris Perry of Dandridge, Tenn., and also have four grandchildren, Paige and Ragan Cutright and Dylan and Cole Perry. Their family members expressed thanks to the couple for their love, support and encouragement, and said they are “the best parents and grandparents ever.”