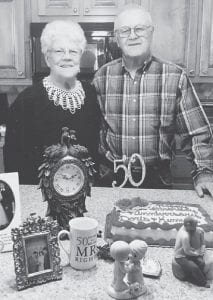 GOLDEN ANNIVERSARY — Doris and Kenneth Hall, of Cromona, celebrated their 50th wedding anniversary February 18. Mrs. Hall also marked her 86th birthday on February 3. Mr. Hall is a retired coal miner and Mrs. Hall is a homemaker. The couple have three children, Karen Kiser of Neon, Denita Carter of Burdine, and Kenna Webb of Payne Gap; five grandchildren; and a number of greatgrandchildren.