‘Goofy’ Bam won’t back down 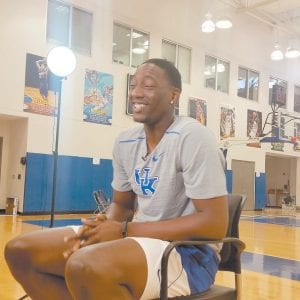 Bam Adebayo says off the court “I am a clown, a goofy guy.” On the court, he can be intimidating. (Larry Vaught Photo)

Before Bam Adebayo started his seventh grade basketball season he had already dunked a basketball. His motor has never quit running since then, either.

The 6-10, 255-pound Adebayo is being counted on to solve the deficiencies Kentucky had with its post play last season with his physical presence and dominant rebounding.

He’s been called a “monster” by many because of the strength and energy he has on the court.

“That is just motivational for me. But really I am a clown, a goofy guy. On the court, I am very serious. It’s time for business on the court. If I am not on the court, you can laugh and smile,” he said.

Just don’t try to intimidate him on the court. It won’t happen. But he also insists he’s not sure why he would intimidate other players.

“I don’t see why they would be intimidated. I am a nice guy. I am not going to hurt anybody. But I have seen guys just see me take off my warm-up and all my body muscle show and then they are like, ‘Wow.’ Maybe that is intimidating,” Adebayo laughingly said. 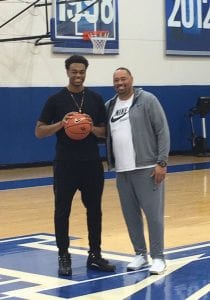 Highly-touted recruit P.J. Washington, pictured with his father above, will be back at Big Blue Madness for an unofficial visit so he can get a feel for what UK fans are like.

Then again, how can a player who freely admits he likes to listen to music by Katy Perry and Whitney Houston be that intimidating? He says Perry is his favorite musical artist because she is “perky” and has happy music that he likes to hear.

What if she came to a Kentucky game? “I would hope that would be the game I played in my college career,” Adebayo said. “I’ve just had a little vibe with her since ninth or 10th grade.”

No, he didn’t have Katy Perry posters at home and has none at UK.

What he can do is energize a basketball team with his emotion, physical play and rebounding. He proved that to veteran high school coach Jack Doss of Alabama during the McDonald’s All- American Game in Chicago in April.

“He got up and down the floor. He handled the ball. He has a great upside,” Doss, who also had UK signees De’Aaron Fox and Sacha Killeya-Jones on his team, said. “To be that big and athletic, his motor still runs all the time. He is going to be a beast on the boards for Kentucky.”

That’s his plan. He wants high expectations on himself.

Could he get a tripledouble this year? “I can’t predict that, but that is the expectation,” Adebayo said. “I also expect to win a national title.”

What Adebayo is not worried about is preseason honors — or his future NBA draft status.

“Right now I am focusing on me and my team. I just want to focus on us being the best team in college basketball and winning the national title,” Adebayo said.

He knows his nickname likely will make him the target of taunts from opposing fans — but he’s okay with that.

“Bam kind of fits with the physicality of my body. Me and my mom, when we lived in New Jersey, were watching the ‘Flintstones’ on TV. I was kind of disruptive and would break stuff. Instantly, I was called Bam Bam (after the cartoon character). Then it just went to Bam.

“One away game in high school all the fans had Flintstone posters. They even let me keep one of those posters. So if you know it is coming, you may as well just have fun with it.”

One of Kentucky’s top basketball recruiting targets — wing John Petty of Alabama — will play twice in the Marshall County Hoop Fest in Benton in December.

The 6-5 Petty has been a top target for coach John Calipari for two years and plays for Mae Jemison, a new school in Huntsville, Ala.

His team will play against Aspire Academy of Arizona December 2 at 4 p.m. CST and then take on Paul Laurence Dunbar December 3. Taveion Hollingsworth averaged 21 points per game last year for Dunbar and led the team to a state title. The Dunbar guard already has scholarship offers from West Virginia and Cincinnati and strong interest from several other teams, including Western Kentucky.

If you want tickets to the event that starts December 1 and ends December 4, call the Marshall County High School athletic office at 270- 527-6714. Tickets are $35 for the entire showcase or $10 per session.

Last week, running back Mikel Horton became the ninth signee in the 2014 recruiting class to decide to transfer from Kentucky. One other player in that class, the highest ranked recruiting class that Mark Stoops has signed in four years at UK, was kicked off the team.

Overall, the 2014 recruiting class has not lived up to the recruiting hype, something players in that class thought they could change this year.

“ We have grown up. Coming in we were 17, 18. As we start to get older, we see the bigger picture. Our maturity levels are going up,” junior receiver Dorian Baker said. “There is always room for improvement. When I was 17 and 18, I felt like nobody could tell me anything and that I had it all. I had all the answers.

“But I have learned you have to sit down and listen to the people who really care about you. They are the ones trying to help you. You can’t get blindsided.”

Baker has been sidelined by a hamstring injury much of this season, which has frustrated him because he knows he’s a veteran now with time running out in his career.

“Time goes by so fast because we stay so busy all day every day from practice to class to tutors. We do the same things and time just flies by,” Baker said. “Seems like just the other day my mom and dad dropped my off at the dorm and I was kissing and hugging them at the elevator telling them to have a safe drive back home. Now I am a junior and it is unbelievable. I am blessed. We all are.”

When Charles Walker finally returned a punt for a touchdown against New Mexico State, it ended a six-year drought for UK on returning a punt for a score. While Walker, a junior, obviously was thrilled with his first touchdown at Kentucky, so were his teammates. No one was more jubilant than freshman offensive tackle Landon Young. “That was awesome. We were getting tired of hearing about no returns for a touchdown and getting that was awesome for him and us,” Young said. “He has been working his butt off, too.

“He was a walk-on coming into camp and got a scholarship and he is an awesome guy. A one in a million guy. Has a great attitude every day. Comes out with a smile on his face. Can’t ask for a better guy.”

Walker is also the only player in Kentucky’s 2014 recruiting class who has played in every game the last three seasons. And as Young noted, he came as a walk-on.

. Offensive coordinator Eddie Gran knew that Boom Williams had some off-field issues his first two seasons at Kentucky and then had to deal with the unexpected death of his younger sister in the summer. Gran and the junior running back sometimes bumped heads, especially during spring practice.

With the emergence of freshman Benny Snell, Williams’s improvement sometimes has been overlooked this season. But Gran keeps saying over and over how proud he is of Williams’s maturity and play.

“I think he matured like crazy. His demeanor and everything has been fantastic. You know, we’ve had our ups and downs, but I think the relationship is good. He knows me now and I know him. I think that’s been really good for both of us,” Gran said.

“We can’t go side to side on any of these SEC teams. I will say this, he can sometimes, but you’ve got to pick and choose when you do that. I think he’s still got to learn that when it’s not there, stick your foot in the ground and get us three yards. And I think he has progressed that way. We’re not there yet but we’re getting closer.”

Williams was not always the first player to congratulate teammates when they had success. That has changed this year. He’s become a mentor to Snell and others.

“He’s always been a talented guy but he’s more detailed in his runs, and his mentality is much better. It’s great for him to see – him on the sidelines smacking Benny on the head and giving him a high five and cheering it instead of it just being about Boom,” Stoops said.

“Boom’s going to get his. Benny’s doing some good things with the physical runs, so it’s a great complement to each other. But you just see growth in all areas (of Boom) and I continue to see that.”

Both Williams and Snell had problems running against Alabama last week, but for UK to beat Vanderbilt Saturday both will need to play well.

P.J. Washington already knows plenty about Kentucky basketball, but his father still felt it was important for him to come back for another visit during Big Blue Madness this weekend.

The 6- 7, 230-pound Findlay Prep (Las Vegas) has been recruited by coach John Calipari and his staff for more than a year. He had hoped to make Big Blue Madness last year but could not work out his schedule to do so.

“He’s been there for an unofficial visit, then an official visit,” said Paul Washington, the star player’s father and coach at Findlay Prep. “But he has not seen the fans and what that looks like. Madness is a great opportunity to do that in Rupp Arena. He will kind of get the college atmosphere that way.

“P.J. has played at a lot higher level than I did. He has played for USA Basketball in Chile. He’s been playing at a high level since ninth grade. He’s been in big venues, but not in a place like Kentucky where it is packed every game.”

Paul Washington knows a lot about Kentucky because he used to live in Louisville and that’s where P.J. was born. He worked for Black & Decker and still has “good friends” in Bowling Green and Louisville.