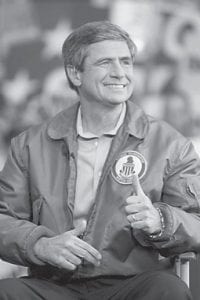 To understand Republicans’ nagging fear that the Nov. 2 elections might not be quite the massive triumph that many have predicted, check out Pennsylvania’s perplexing Senate race.

Democratic Rep. Joe Sestak has trailed Republican Pat Toomey for months, and a GOP victory always has seemed likely, given that it’s a Republican-trending year in this perpetually contested state. Yet recent polls suggest Sestak has closed the gap, and Republican leaders are imploring supporters not to panic even as they ask themselves: What’s going on?

The Sestak-Toomey race mirrors other Senate contests that are making this one of the most intriguing and unpredictable midterm elections in years.

Just as in Nevada, Colorado, Kentucky, and perhaps Alaska and Connecticut, each candidate is an accomplished but imperfect politician, and the tea party movement is playing a big but uncertain role.

In most of those states, plus Washington and California, Senate races are tightening to nail-biting margins. That means Republicans might pick up a few seats or as many as 10, which would give them the majority. Democrats privately concede they may be unable to keep their House majority, but losing the Senate would be devastating.

President Barack Obama’s travels now focus largely on trying to save Democratic senators in Washington, California, Nevada and Wisconsin, a clear sign that his party is still playing defense.

While California and Washington see Senate GOP challengers creeping up on Democratic incumbents, it’s embattled Democrats who seem to be rising elsewhere. They have seized on a common claim: A dangerous fringe movement, the tea party, has taken over the Republican Party.

Sestak is using that fact — plus, curiously, the notoriety of tea partier Christine O’Donnell, the GOP Senate nominee in neighboring Delaware — to paint Toomey as a pilot of a new and scary Republican Party veering dangerously to the fringe.

In speeches and ads, Sestak ties Toomey to O’Donnell, the headlinegrabbing upstart who trails by double digits in Delaware polls. In a debate Oct. 20, Sestak said he worries about “those extreme candidates” who take advantage of “the extreme fringe of the tea party. There are those that are running with Congressman Toomey. Miss O’Donnell next door, for example.”

While many analysts have predicted a tightening of Senate races, the strategy might be working. If that perception spreads, it will embolden Democrats making similar claims against tea party Republicans in Nevada, Colorado and elsewhere.

It might even give hope to Democratic Senate nominee Jack Conway in Kentucky, where Republican Rand Paul has not quite sealed a victory.

In Alaska’s complex race, Sen. Lisa Murkowski is slapping the too-extreme label on Joe Miller, the tea party favorite who denied her the Republican nomination. Murkowski is trying a write-in campaign, while the Democratic nominee, Scott McAdams, seems to be running third.

— Democrats are thought to have a superior get-out-the-vote operation here and in other states, and the latest polls might be reflecting the heavy contact of voters by phone and door-knocking.

— Obama and others have said Democratic voters will “wake up” when they realize what’s at stake, and some analysts think that’s happening now.

Many Republicans scoff at these claims, saying a powerful tide of voter anger still runs heavily in their favor.

To be sure, Sestak has his own problems, just as Sen. Harry Reid has poor approval ratings in Nevada, and Sen. Michael Bennet struggles to defend his support of Obama in Colorado.

Pennsylvania Republicans say the intense former Navy admiral is too liberal for this centrist state. They note that Sestak, a two-term House member, wanted a public insurance option in the new health care law, a larger stimulus package than the $814 billion plan Congress approved, and a tougher cap-and-trade energy bill than the House passed.

A TV ad by the National Republican Senatorial Committee rattles off those points with machine-gun speed, part of a torrent of campaign attacks by both parties that assault Pennsylvania viewers daily. Plenty of anti-Toomey ads air, too. Some voters say they now tune out the entire avalanche of commercials for and against House, Senate and gubernatorial candidates.

In a televised debate in Pittsburgh on Oct. 22, Sestak defended Obama’s stimulus spending. He said mainstream economists believe 8 million more jobs would have disappeared without the blend of middle-class tax cuts and help for cashstrapped state governments and the unemployed.

Toomey said three years of halving payroll taxes would have been more effective, by making it less costly for businesses to hire new workers.

As elsewhere, the Pennsylvania political debates and TV ads specialize in guilt-by-association.

One 30-second anti-Sestak ad ties him to Obama, House Speaker Nancy Pelosi, D-Calif., and Reid on the issues of stimulus spending, bank bailouts and energy.

Sestak sandwiched his opponent between the most famous tea party figures, alluding to “Palin, Toomey, O’Donnell” as if they were a law firm.

Toomey was in the House from 1999 to 2005, but Sestak invariably calls him “congressman” in this anti-insider year.

The GOP nominee is trying to keep some distance from tea party activists while embracing more traditional Republicans. But speaking later with reporters, Toomey was expressionless when asked if Palin is qualified to be president, a question he sidestepped in the Oct. 20 debate.

Ed Rendell, a former Democratic Party national chairman who is retiring after two terms as Pennsylvania governor, said in an interview that he thinks the specter of an ascendant tea party is lighting a fire under Democratic voters.

“Democrats are getting scared by all the craziness out there,” he said moments after campaigning for Sestak at Temple University. He cited Republicans who want to subpoena scores of Obama administration officials and who would outlaw abortion for rape victims. That message, plus the party’s get-out-the-vote push, might help candidates such as Sestak pull off upsets on Nov. 2, Rendell said. Or maybe not.

“It’s all coming together,” Rendell said. “Now will it come together fast enough to make a diff erence? I can’t predict that.”