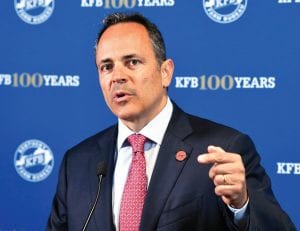 Democratic gubernatorial nominee Andy Beshear won an endorsement this week from a longtime Republican state lawmaker who criticized GOP Gov. Matt Bevin for “running around the state insulting” people — including teachers in his own family.

Sen. Dan Seum, a former member of the Senate GOP leadership team, announced his support for Beshear at the start of a crucial week in Kentucky’s hard- fought governor’s race. Bevin and Beshear will square off Saturday at the Fancy Farm picnic — the state’s biggest political event.

Seum is the first Republican state lawmaker to endorse Beshear this year. In a video announcing his support for Beshear, Seum blasted the governor’s handling of the state pension issue and Bevin’s high-profile feud with some public education groups.

“Today, we have a governor who has failed miserably in the pension issue and has spent the last year running around the state insulting everyone, including the four teachers in my family,” Seum said while standing alongside Beshear in the video.

Beshear repeated his theme that the campaign is “about right vs. wrong,” adding: “We welcome Sen. Seum’s support and there is room on this team for everyone.”

Seum — who represents Bullitt County and part of Louisville — is a conservative lawmaker who formerly served as Senate majority caucus chairman. He’s a former Democrat whose switch to the GOP helped vault Republicans into the Senate majority two decades ago. The GOP has since built an overwhelming advantage in the Senate.

Bevin saw his approval ratings slump last year after his failed attempt to change the state’s struggling public pension systems. His comments about teachers and other public workers who opposed his ideas prompted thousands to protest at the state Capitol last year, closing schools in more than 30 districts statewide. Statehouse protests continued this year.

Bevin has criticized teachers who used sick days to rally at the statehouse. In 2018, he asserted without evidence that a child who had been left home alone was sexually assaulted on a day of mass school closings as teachers rallied. He apologized but then doubled down this spring, connecting a girl’s shooting in Louisville with school closings caused by teacher protests.

Pension issues have cast a long shadow over the governor’s tenure in office, as he and lawmakers have struggled to shore up one of the country’s worst-funded public pension systems. Last week, Bevin signed a bill drafted by his office to relieve regional universities and community social services agencies from crushing pension costs. The measure passed during a special legislative session after Bevin vetoed a similar bill passed in the spring that he said had flaws.

Bevin said he has done much better than his recent predecessors in funding the state’s pension obligations.

In a hard-hitting response that mischaracterized policy positions of both Beshear and Seum, Bevin campaign manager Davis Paine said: “If Sen. Seum wants to support sanctuary cities and abortion up until the moment of birth, that’s his decision to make. Governor Bevin has been endorsed by President Trump, the NRA and Kentucky Right to Life.”

Seum’s profile on the legislature’s website lists him as a member of an anti-abortion caucus.

On the sanctuary cities issue, Bevin recently joined two Republican legislators to unveil a bill that would ban local governments and state universities from adopting “sanctuary policies” for immigrants in the country illegally. Beshear, the state’s attorney general, has pointed out that there are no sanctuary cities in Kentucky and says state leaders should focus on other issues.