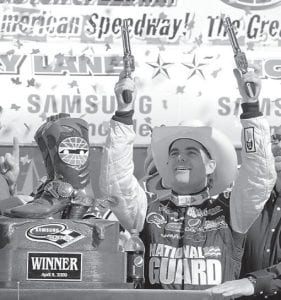 SIX-SHOOTER GORDON — Jeff Gordon celebrated in victory lane with a pair of pistols after winning the NASCAR Samsung 500 auto race at Texas Motor Speedway on Sunday in Fort Worth. (AP Photo)

How would you like to have a career in Sprint Cup Racing that has been so dominating that a season in which you finished seventh in the final point standings was considered your worst season in over a decade? That is just how good of a career that Jeff Gordon has put together since going full time with Hendrick Motorsports in 1993.

His numbers going into this season are those of a driver that will one day grace the walls of NASCAR’s soon-to-be-completed Hall of Fame in Charlotte. He entered this season with 81 career wins, 247 top-5 and 336 top-10 finishes, but the biggest stats on his resume are the four titles that really separate him from the rest of the drivers now competing in the sport.

Those are definitely Hall of Fame-type stats, but unfortunately for the rest of the series he is just now approaching the prime of his career at the age of 37. Most drivers today are still competing well into their 40s and there is no reason to believe we will not be seeing him behind he wheel of his Dupont Chevrolet for years to come.

Even as great as Gordon’s run has been so far in the sport, before Sunday’s win at Texas he was in the middle of the longest winless drought of his career. It had been the October race of 2007 at Lowe’s Motors Speedway since he made his last trip to victory lane. What made the win at Texas even sweeter for Gordon was the fact that Texas was one of only two tracks (Miami is the other) on the schedule where he hadn’t posted a win.

The end of the streak no doubt took some pressure off Gordon and his crew chief Steve Letarte, but a look at the first six races of the season leading up to Texas shows that Gordon and Letarte were beginning to put together the kind of year that could end up being championship number five. It is his best start of a season since 2007 when he battled teammate Jimmie Johnson for the championship before finishing second.

Even though he was winless going into Texas, he still was posting numbers that showed him to be a threat at every stop on the schedule. The first six races on this season’s schedule showed him leading the series with a 5.2 finishing average, but his average racing position during those six races of 5.4 shows that even though he was winless, he has definitely been a threat to win each weekend.

Gordon’s biggest threat to winning his fifth Cup title this season may come from teammate Jimmie Johnson, who is going for his fourth consecutive crown. Johnson finished second at Texas and it moved him up two spots into second place in the standings. Both drivers know that leading the standings at this point is nice, but in reality every driver in the top 12 at the end of the September Richmond race has the opportunity to move on and race for the title.

Gordon and Johnson also know that every win posted before that race gives a driver in the Chase a 10-point bonus, which can really help get a driver off to a good start as just one bad race in the 10-race Chase format can take a driver out of contention. Last season, Johnson started the Chase with 40 additional bonus points awarded to him for his four wins leading up to that point but that was only half of what Kyle Busch received as he had posted eight wins before the playoff round which gave him an additional 80 points to start the Chase.

There is plenty of racing between now and the 26th race of the season at Richmond, but it is easy to see that every win posted between now and then can go a long way in determining the 2009 Sprint Cup champion. Up until last season, Gordon had posted 14 consecutive years of multiple wins in the series and with one win already under his belt it may be that he is ready to once again take his spot on top of the sport and notch his fifth Cup Series title.