Gordon man charged after pills, marijuana are found in his home 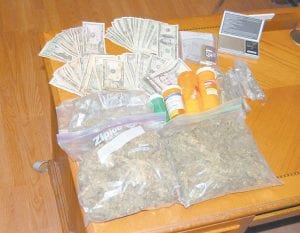 A Gordon man was arrested on several drug-related charges Tuesday evening after police found marijuana and controlled substances in his residence.

More than three pounds of processed marijuana, 200 pain pills and $2,500 in cash were seized on Feb. 16 from the residence of Jerry Halcomb, 46, of 378 Valley Branch Road.

Lt. Brian Damron of the Letcher County Sheriff ’s Department said some of the marijuana was found in gallon-size bags and some was packaged to sell.

A set of digital weighing scales and several guns including a sawed-off shotgun were also found in the residence.

Damron said the residence is located in a secluded area and he was able to see an overview of the residence and the surrounding layout. Police used the pictometry program to plan avenues of approach to the residence.

Damron said the sheriff ’s department is in the process of using pictometry as a part of everyday responsibilities.

Webb said he received several citizen complaints from residents in Gordon about Halcomb.

Damron has charge of the investigation.