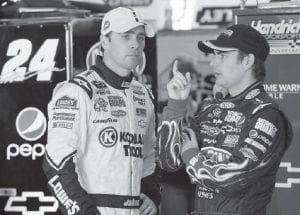 Jeff Gordon, for at least a decade, was the biggest star in NASCAR.

He dominated the sport on the track, steamrolling his way to 47 victories and his first three championships over a four-year span during which he was nearly unbeatable. And he transformed NASCAR away from the track, becoming the first driver to dazzle Madison Avenue and earn mainstream endorsement opportunities that the entire industry ultimately benefited from.

The spotlight eventually shifted, though, to teammate Jimmie Johnson.

With four consecutive championships and 50 wins over eight years, Johnson is now king of the road.

And Gordon, the original “Four-Time,” seems just about over it.

“He’s been testing my patience,” Gordon said after Sunday’s race at Talladega Superspeedway, “and it’s about reached its boiling point.”

Rarely since Johnson’s 2002 arrival has Gordon been publicly negative toward his one-time protege. They had nothing but praise for each other during their epic 2007 championship battle, and have been careful not to create the appearance of anything but a friendly rivalry.

That’s changed over the last two weeks as Gordon has gone through a clear public shift after incidents in consecutive races.

He was caught griping over his team radio during last week’s race at Texas, where he was annoyed with how hard Johnson was racing him. “He just wants to be treated diff erent than anybody else,” Gordon told his crew while sarcastically referring to Johnson as “Four-Time” — Gordon’s industry nickname.

Then came another incident late in Sunday’s race, when Johnson saw Gordon flying through Talladega traffic and ducked low to get in front of him. Johnson insisted he was trying to get in position to work with his teammate, but misjudged Gordon’s closing rate.

“My intentions were on the upand up, I thought we’d hook up and move to the front,” Johnson told The Associated Press. “Certainly, that was my fault. I made the mistake there.”

Instead, Johnson’s move forced Gordon to duck off the apron of the track to avoid crashing into his teammate. His momentum lost, he slipped back in traffic and was caught moments later in a multicar wreck.

“He decided to change three lanes and keep me from going by him,” Gordon said. “That’s just not cool when you’ve got cars going that much faster than you.”

Johnson remains convinced Gordon’s remarks stemmed only from frustration in wrecking, and there is no deeper issue between the two friends. He may be right in that it’s nothing personal, but something obviously has changed in Gordon of late.

But why now? After all, Johnson has been consistently outperforming Gordon since 2003.

The simple answer is Gordon wants to win. He’s been shut out of Victory Lane for 38 straight races, dating to early last season at Texas. During that span, he’s notched a frustrating seven runner-up finishes. This season alone, he was the late leader in three races but couldn’t close out the wins. One of them, at Las Vegas, was a race Gordon dominated and lost to Johnson because of pit strategy on the final caution.

“He’s not sick of Jimmie, he’s just on the chip,” Hendrick said before Sunday’s race. “He’s fired up. He should have won three races already — three or four maybe. He’s kind of getting in his groove. I see so much of the old Jeff .”

And maybe the “old Jeff ” is what’s been missing of late.

It was there in 2007, when he was by far the most dominant driver all season and set a NASCAR record with 30 top-10 finishes. He and Johnson waged a tremendous Chase for the championship battle, with Gordon winning two Chase races only to see Johnson win four en route to his second championship.

Gordon was a consummate professional during his heartbreaking defeat. He lavished praise on his teammate, visited him in Victory Lane after each win, and humorously bowed as if to say “I’m not worthy” following Johnson’s nail-in-the-coffin win at Phoenix.

He could be gracious back then, though. In any other year, Gordon would have been the easy champion and he had every reason to believe there would be more seasons like that magical 2007 ride. After all, this is a guy ranked sixth on NASCAR’s career wins list (82) and tied for third, with Johnson, for most titles (but none since 2001, the year before Johnson joined HMS).

But they haven’t come. The next year was a winless season during which he made the Chase but was never a title contender, and although he finished third in the standings last year, the only championship battle was between Johnson and their newest teammate, Mark Martin.

Johnson’s record-making fourth title brought a slew of new opportunities from coast-to-coast, including his own HBO special series and mainstream recognition that usually was reserved for Gordon.

It may be a stretch to call Gordon jealous, particularly of a fellow driver he’s considered a very close friend. Besides, he’s heavily invested in Johnson’s success; it was Gordon who brought Johnson to Hendrick when the team expanded to four cars, and as coowner of the No. 48, Gordon does quite well financially.

But people change and circumstances change. Gordon, who was at the end of his first marriage when he and Johnson initially met, has since gone through a divorce, single life, a new marriage and fatherhood. He also suff ered through chronic back pain for a two-year stretch during which his production clearly suff ered.

Now 38 years old, awaiting the birth of his first son, and back in cars that can contend for race wins, he seems to have a renewed hunger.

Maybe it’s Johnson’s constant success that is driving that desire. Or maybe it’s something more contrived. Everybody knows Johnson doesn’t ever like being the bad guy, and criticizing him could be Gordon’s strategy for toppling the champion.

Either way, it appears ol’ Four- Time has his edge back. Let’s see what he can do with it