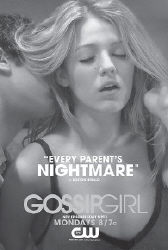 “Gossip Girl” will get people talking. At least, that seems likely as the CW network brings to a boil its new campaign for the sexy prep-school soap.

The show’s second season begins Sept. 1, following an August promotion to put viewers, um, in the mood. And here’s a twist: The racy ads co-opt language from the very criticism of the show for being too, well, racy.

Alert surfers got a preview earlier this month when images of coupled-up “Gossip Girl” characters found their way onto several Web sites.

Strongly suggesting the pair are just getting started, the headline, which quotes The Boston Herald, declares: “Every Parent’s Nightmare.”

Other such lovey-dovey moments (on a couch, in the sack or apparently skinny-dipping) are accompanied by headlines like “A Nasty Piece of Work” and “Mind-Blowingly Inappropriate.”

That latter phrase was borrowed from the Parents Television Council, which has blasted the series’ salacious content since its premiere.

“What we’re trying to do is communicate with the audience in a way that they like and can appreciate,” he said. “This sort of campaign resonates with someone who likes ‘Gossip Girl'” — specifically, women ages 18 to 34.

The series, based on the popular “Gossip Girl” young-adult novels, debuted last fall.