Got a date for the prom? Yes, enough to fill a bus 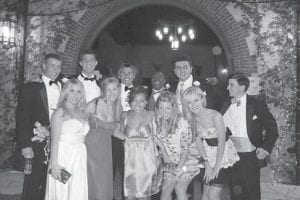 This photo provided by Mary Institute and St. Louis Country Day School (MICDS) shows Upper School students at MICDS during the school’s prom held recently at Grant’s Farm in St. Louis, Mo. Louise Morgan, head of MICDS, estimates that 75 percent of the kids attend the prom in groups rather than as couples.

In many high schools, the pressure is off when it comes to finding that special someone to take to the prom.

Instead, teens are going to the prom in groups so big that they sometimes arrive in buses rather than limousines.

The trend is seen largely as a positive one, because it allows more kids to participate without the stress of finding a date or being part of a couple.

“They have definitely slid away from feeling that ‘Oh my goodness, if I don’t have a date, I can’t go,’ or ‘If I’m not in love, I can’t have a good time,’” said Louise Morgan, head of the Upper School at Mary Institute St. Louis Country Day School in Missouri (MICDS). Morgan estimated that 75 percent of the kids attend the prom in groups rather than as couples.

“The going-in-groups trend has allowed it to be more fun, more relaxed,” she added. “Everything doesn’t have to be romantically perfect like Cinderella.”

“The way it used to be, when I’ve seen it in movies, is that the guy takes care of the girl and is expected to pay for the girl’s ticket,” said Adrienne Alair, a high school student who is going with a group of friends to her May 15 prom at the Northwest School of the Arts in Charlotte, N.C.

“I’m into the whole feminism thing,” Adrienne added. “We buy our own ticket, go with a group of friends, and if you don’t get a date, you can have fun anyway and not worry about it being a popularity contest.”

Her mom, Moira Alair, said “it’s so much better than when I was a kid, when the kids went mainly as couples. This way if you’re not already in a dating relationship, there’s no stigma. No one needs to be left out.”

Blair O’Brien, a junior at MICDS, where the prom is traditionally attended by both juniors and seniors, went to the April 10 event with 21 friends.

“Some people had dates, some people went with a group,” she said. “And it doesn’t really matter who you dance with. It’s a freefor all.”

Blair added that even though the couples tradition is on the decline, dressing up for prom remains a sacred rite.“

You’re queen for a day,” she said. “For girls, prom is an all-day event where you get your hair done, nails done, and constant pampering.”

Missi Koebler, who owns Secrets of Hairdesign Salon and Day Spa in Butler, Pa., agreed, saying that she serves “a ton of prom-goers throughout prom season, and I’ve definitely noticed that most of our prom clients are following the trend of going in large groups. In fact, it’s very rare that we hear of any of our girls heading off to prom with just their date. Most often, we hear a lot about large dinner parties and group activities before and after the prom.”

Daniel Unger, now a freshman at California State University Northridge, attended his high school prom last year in Long Beach, Calif., with two other guys. He said part of why the couples tradition is going away is that “girls who don’t find dates tend to hang in groups, which makes it very hard to ask them privately. The only alternative I saw for guy who did not have a date was to approach these groups and face public rejection.”

But some experts believe the trend toward attending proms in groups — which has been growing for over a decade — reflects a larger shift away from traditional dating patterns among high-school and college-age young people, with more casual hook-ups for sex and no effort to establish serious monogamous relationships.

“They are ‘hanging out’ as a group and indicating non-verbally their interest in each other,” said Lissa Yogan, who teaches a class called “Sex and Society” at Valparaiso University in Indiana. “Several students have told me that dating is just too much work.

They comment that it requires more emotional and time involvement, it is a financial hardship for some men and they often prefer the ease of doing things with friends and hooking up when they so desire.”

Dating trends aside, going to the prom with a big group poses one major logistical challenge: transportation.

Blair’s mother, Melody Walker, said her daughter’s gang of 21 “had to rent a huge bus — all the stretch Hummers were taken by the time they got organized — to ferry them to dinner and the prom.”