Got raw milk? Some think it’s their right

By SCOTT WARTMAN
The Kentucky Enquirer 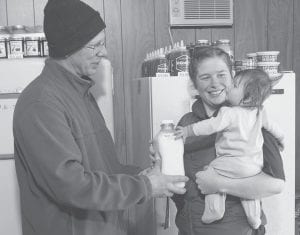 In this recent photo, dairy farmer Trevor Gilkerson handed customer, Amanda Owens, and her 5-month-old daughter, Mardi, a half-gallon of bottled raw milk on his family farm just outside of Brookings, S.D. Trevor partners with his father Jim Gilkerson on the Jerseydale farm. They sell most of their milk to a large production facility, but Trevor sells around 100 gallons of milk a week to about 50 local customers. Owens has been buying raw milk from Gilkerson since 2005.(AP Photo)

If you want raw milk in Kentucky, you have to buy a cow – or at least a share of a cow. And you can’t cross state lines to get it.

The Lewis County Republican believes the choice of whether to buy raw milk should be up to the consumer – some of whom consider raw milk healthier than processed milk – not the government. It’s part of a series of “food freedom” bills the freshman Republican said he will introduce.

“I’m coming at it from a constitutional angle,” said Massie, who admits to drinking “bootleg yogurt.”

“The federal government doesn’t have the constitutional authority to ban a food product we’ve been consuming for thousands of years.”

But Massie’s plans to make raw milk more accessible, and even to allow farmers to sell beef directly to consumers – a bill he plans to introduce later – have some health organizations aghast. The federal government and health groups say raw milk is dangerous and needs to be kept out of grocery stores.

Massie has filed two “milk freedom” bills that wouldn’t change state laws but would lift federal prohibitions on selling and transporting raw milk between the states.

Massie said the first “food freedom” bill he introduced was a 2013 bill to legalize industrial hemp; it hasn’t passed.

He hopes to introduce a bill similar to his raw milk bills that would allow farmers to sell beef directly to consumers without the beef having to go through a United States Department of Agriculture certified processing facility.

He wants to stop events like the FDA’s 2010 raid of a Pennsylvania Amish farm caught selling raw milk to people outside the state.

The FDA has mandated pasteurization of all milk products since 1987, which in effect prohibits the sale or transportation of unpasteurized milk between states.

Laws regarding raw milk differ from state to state. Only 11 states allow the retail sale of raw milk, with the closest one being Pennsylvania, according to the Falls Church, Va.- based Farm-to-Consumer Legal Defense Fund.

Some farmers offer shares of cows, called herdshares, because it’s illegal in most states to sell raw unpasteurized milk – but the law doesn’t stop someone from drinking milk from their own cow.

Massie wants to leave food regulation up to the states. His raw milk bills would allow states to decide whether raw milk should be legal or illegal. When asked whether there should be a uniform standard for food safety throughout the United States, Massie maintained it should be up to individual states.

“It’s not our job in Kentucky to make sure people in California are safe,” Massie said. “That’s why we elect our own people.” States would still be allowed to ban raw milk if they wanted.

Those who swear by raw milk don’t want the federal government making it harder to buy.

Crippling arthritis pain 11 years ago prompted farmer Joe Streit to start drinking raw milk. He bought a cow to provide the milk for him and his wife, Janet.

Now, with his arthritis gone, he sells 60 gallons of raw milk and 10 pounds of raw- milk butter daily from his Double J Farm in Trenton.

His 29 cows are owned in part by 265 people who travel as far as two hours to get their raw milk. People pay him $50 to buy a share and pay $30 per month per share. Each share buys a gallon of raw milk per week. That works out to about $7 per gallon.

“I had a lot of back trouble by the time I was 55 years old,” Streit said. “I had serious back trouble. Joint pain, arthritis paint. Now I’m 71 years old and I don’t have any of that pain.”

The cows on Double J Farm line up in orderly fashion when it’s milking time, twice a day, seven days a week, once at 5 a.m. and again at 5 p.m. As machines pump, the milk goes through a paper filter to catch any hair and debris before going into a tank chilled at 38 degrees.

That’s all the processing it gets before going into bottles for his customers to pick up. Double J Farm works on the honor system for payment, with his customers going into a store, taking their allotment of milk and/ or butter and leaving the appropriate amount of money.

The only issue in 10 years was one bounced check, and that was an honest mistake, Janet Streit said.

“ They are really great people and they come from a long ways,” she said. “They mean business. They are not going to steal from us when this is what they want.”

The desire for raw milk spurred Marcia Stephens, 58, of Madeira, to start a group of Cincinnati-area residents who take turns bringing back raw milk from Streit’s farm. It’s grown from a handful of people to 16 residents, she said.

“People have a right to be in charge of their own health,” Stephens said. “We don’t need someone to legislate and tell us what we should and should not eat.”

The American Medical Association, Center for Disease Control and American Academy of Pediatrics all advise against unpasteurized milk.

The Center for Disease Control has warned that people run the risk of e.coli, cryptosporidium and other food- borne illnesses by drinking raw milk. In a report released in 2012 examining dairy product illness outbreaks, the CDC said 60 percent of the 122 disease outbreaks caused by dairy products between 1993- 2006 involved raw milk.

“For the general consumer buying milk sitting on a dairy case and shelf assuming it to be safe, we can assure them it’s pathogen free and permitted,” Ramsey said.

• The process involves heating milk or other food for an extended period of time to kill bacteria and other pathogens.

• The FDA and CDC dispute the assertion that pasteurization lowers the nutritional value of milk.