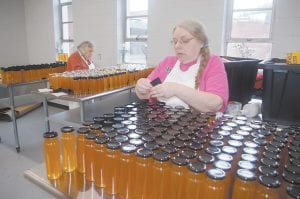 JAM UP AND JELLY TIGHT — Joyce Pinson, foreground, and her mother, Verol Friend, package jams and jellies at the CANE Kitchen. (Photo by Sam Adams)

Joyce Pinson rushed from one table to the next slipping plastic sleeves over the top of narrow, glass jars.

Her mother, Verol Friend, followed close behind with a heat gun, shrinking the plastic to make a safety seal on each jar of jam.

Pinson, her husband Charlie, and her mother, who live in Pike County, spend a couple of days every week in the CANE Kitchen in Whitesburg putting together case after case of jams and jellies. The nonprofit commercial kitchen, built in the old Whitesburg High School, was designed to help local farmers add value to the produce they raise. With Pinson’s work, it has become a factory for food destined for a gourmet grocery in Louisville, and has given the Pinsons’ Friends Drift Inn Farm a place to meet the demands of a high-end customer in a metro area of more than 1.3 million people.

Community Agricultural Nutritional Enterprise leased the kitchen and cafeteria area of the building for $1 a year for 20 years from Mountain Comprehensive Health Corporation, which bought the old high school at auction and is remodeling part of it for office space, said Valerie Horn of Cowan Community Center, which started CANE. The group used $150,000 from the Appalachian Impact Fund, Grow Appalachia, Appalshop, Hindman Bank, Community Trust Bank, Whitaker Bank, and the City of Whitesburg to remodel the kitchen and dining room, and got surplus kitchen equipment from the Letcher County Public Schools. 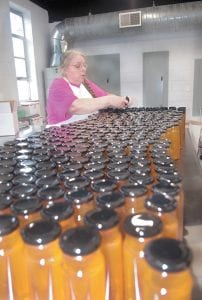 Joyce Pinson has a standing order of 6,000 jars of jams and jellies per month. She ships her products to a gourmet food store in Louisville. (Photo by Sam Adams)

The CANE kitchen opened last August, and has been growing since then with catered events, community gatherings, and food producers using it at different times. In addition to Friends Drift Inn, Southdown Farms from Craft’s Colly packages applesauce and apple butter there, and Shelby Creek Farm of Jenkins makes goat milk lotion. Chef Greg Clisso, who operates a restaurant in Pound, Va., caters events in this area from the CANE Kitchen, Horn said.

“December probably was by far the busiest month we’ve had, and we anticipate getting busier with the growing season,” Horn said. “We will be participating in the USDA summer food service program, if churches or organization want to get involved in that.”

On a recent Tuesday, Pinson flitted from one table to another putting lot numbers on jars by hand, then moving on to the seals. Up until about the first of April, the kitchen didn’t have a machine to fill the jars, so Pinson did them one by one.

“We (were) pouring everything by hand, so if you can imagine pouring 6,000 jars one at a time …,” Pinson said, rolling her eyes.

The order she was working on at the time was an apple jam flavored with mint and bourbon, and named for the well-known Kentucky Derby cocktail, the mint julep. It can be used as glazing for lamb and other meats, and she has a standing order for 6,000 jars of that and other jams every month from Bourbon Barrel Foods, a gourmet food and gift shop in Louisville’s historic Butchertown neighborhood.

The problem of pouring by hand, is no longer a problem. CANE just used money from a U.S. Department of Agriculture grant to buy a $30,000 jar filler that Pinson and other cooks will be able to use when they fill large orders.