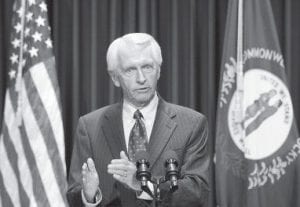 Kentucky’s horse racing industry would get a stimulus package of its own under Gov. Steve Beshear’s proposal to allow video gambling in the state, with the bulk of the proceeds going to the tracks.

The Kentucky Lottery Corp. would oversee video slot machines to be allowed exclusively at race tracks in the state under the plan Beshear released Tuesday. Military personnel and people who own motor vehicles would also get a financial bonus under the plan.

“Kentucky’s signature horse racing industry is in a state of crisis,” Beshear said in a statement. “I believe my proposal will help level the playing field for Kentucky’s horse industry.”

But the gambling plan — heatedly debated in Kentucky for years — has become the session’s hotbutton topic.

Twelve other states — including Kentucky neighbors West Virginia and Indiana — allow betters to wager on video gambling machines, slot machines or other casino style games, according to the American Gaming Association’s 2009 State of the States report.

Expanded gambling supporters say Kentucky’s horse industry is losing money, and horses, to other states that supplement their tracks and purses with revenue from additional gambling.

Beshear, a Democrat, made expanded gambling a centerpiece of his 2007 gubernatorial campaign. He has tried and failed to get the legislature to pass a more ambitious plan that would have offered voters a constitutional amendment and led to full-scale casinos in Kentucky.

Now, Beshear vows to help the horse industry better compete with other racing states by giving them the ability to make money off of slot machines. The plan, Beshear said, also would boost purses and other breeders’ incentives.

The state would initially collect about $300 million in revenue the first two years; that number drops to about $270 million by the fifth and subsequent years, Beshear spokesman Jay Blanton said.

About $18 million of state money would go to eliminate the state income tax for people on active military duty. Kentucky motorists would also get a 50-percent credit on motor vehicle taxes.

Without additional money, Ellis Park in western Kentucky would have to close after this year, owner Ron Geary said.

“We need some help and we need it now,” Geary said. “I’ve said our signature industry is fading away.”

“When people think of the horse industry, they’re thinking in large part of the horse farms that are here, the breeders and that sort of thing,” said Martin Cothran, spokesman for the antigambling group Say No to Casinos. “The proponents of this bill are playing off of that image, and yet, most of the money isn’t going there in this bill. It’s going to the tracks.”

But the Kentucky Horse Racing Commission voted unanimously to back the proposal Tuesday afternoon.

“This is going to help all Kentuckians,” Northrop said. “A lot of the ‘No’ votes are just voting ‘No’ against the racetracks. I think they need to look at the big picture.”