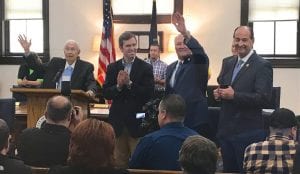 On his fourth trip to eastern Kentucky since his election in November, Gov. Andy Beshear said he came to Whitesburg not bearing gifts, but bearing rewards.

“We brought four checks, so it’s going to be a good afternoon,” Beshear told the crowd in the Whitesburg City Council chambers.

But he added that the checks represent the culmination of hard work by local volunteers and officials, not a giveaway.

“These are not gifts, these are earned,” he said. “This means people are innovative. ”

The governor on Monday delivered grant awards — two for Letcher County and two for the City of Whitesburg — totaling more than $1.6 million to be spent on infrastructure, tourism and recreation.

The city will get $101,239 from the Land and Water Conservation Fund to turn the city pool on Parks Street into a splash park. It will also get a $1,305,000 grant from the Appalachian Regional Commission to replace a water tank in West Whitesburg and water lines along KY 15.

Beshear said like healthcare, clean water is a quality of life issue.

“We will use every source of money available to make sure everyone in the state has clean water,” he said.

Construction on both projects is expected to begin this spring.

Letcher County will receive $40,000 in emergency road aid to repair Bridge Loop, which was damaged by flooding earlier this year, and $193,318 from the Land and Water Conservation Fund for major upgrades at Fishpond Lake, including more recreational vehicle sites, laundry facilities, a visitors center and improvements to address water quality issues.

“We appreciate the governor coming here, and the grant money and the interest of the cabinet,” Adams said.

The checks were emblematic of the governor’s speech, which emphasized unity among Democrats and Republicans. Craft is a Democrat. Adams is a Republican. Without mentioning the previous governor by name, Beshear made several references to the lack of unity in the state over the past few years, and called for everyone in government and out of it to work together to move the state forward. Beshear noted that nearly every national ranking in the country has placed Kentucky at 47th in wealth and education.

“I don’t know about you, but I’m tired of being the third poorest state in the nation,” he said.

Beshear acknowledged the loss of jobs in the coal industry in Letcher County, but said his administration is the first in history to return 100 percent of coal severance tax money to the counties where it originated, in hopes it will spur growth and development here.

Beshear, who rode a wave of anger from teachers and state employees at attempts by his predecessor to cut pensions, and insults hurled at them from the governor’s office, said education is a priority because it gives all of Kentucky a chance to succeed. He has waived the high school equivalency test fee for people who can’t afford it, because he said it will give people opportunities they would not have otherwise.

“Just as we’ve seen it change lives, it can change Kentucky for the better forever,” Beshear said.

He said for the first time in 14 years, the budget submitted to the legislature does not make “hard cuts,” while at the same time providing a one percent increase in per student “SEEK” money, 60,000 new need-based scholarships, and $400 million in new money for education, including a $2,000 annual raise for every teacher.

“The most important job in Kentucky is not governor,” he said. “It’s teacher.”

“I believe health care is a basic human right,” he said. “Everyone should see their own doctor in their own town.”

That’s why, he said, the budget supplies full funding for expanded Medicaid and $2 million to make sure every child in the state is signed up for health insurance.

Beshear promised another $90 million for accelerated completion of the Mountain Parkway, and then to finish the other roads in the region up to standards required to recruit industry.

In addition to checks, Beshear brought his special advisor, Rocky Adkins, who Beshear described as a “tireless advocate for eastern Kentucky.” Adkins, a longtime state legislator and majority leader, ran against Beshear in the primary election last year, but had been a staunch supporter of him in the November election and since taking office. He resigned from the legislature to take the post as advisor.

He praised Beshear for not forgetting about eastern Kentucky, the place where he grew up and “I’m passionate about.” But while Beshear preached unity and reaching across the aisle, Adkins was plainspoken about the dysfunction in Frankfort over the past four years.

“He is not just talking the talk, he is walking the walk,” Adkins said. “He has changed the attitude in Frankfort. He has made sure that people know the Capitol doesn’t belong to any governor or any party, it belongs to the people.”

The remark was a thinly veiled reference to former Governor Matt Bevin and Republican legislators, who had the doors to the Capitol locked to keep out teachers protesting against pension legislation.

Adkins also lauded the governor’s efforts to keep the Medicaid expansion that Beshear’s father, then- Gov. Steve Beshear, put in place and Bevin gutted with a federal waiver. A 25- year cancer survivor, Adkins said the Medicaid expansion doesn’t just help the patients who have it, it also keeps rural hospitals open and spurs the economy. Beshear had mentioned earlier the closing of Our Lady of Bellefonte Hospital near Ashland, which will result in 1,000 lost jobs.

Adkins said Beshear has delivered on promises to bring money for industrial parks, airports and infrastructure to eastern Kentucky. Though not mentioned specifically on Monday, Letcher County received $615,000 from the Department of Transportation just before Christmas to buy property for a new airport. Those things are important in a place where jobs have disappeared, and the economy has stagnated, Adkins said.

“I worked in the coal industry for 30 years of my life. I am a friend of coal, like your hat says,” Adkins said, pointing at a man in the audience. “But we have to diversify.”

He went to work for Beshear, he said, because he believed him when he said he would help eastern Kentucky, and the four trips so far “will be just the start of many more.”

Adkins did not mention specifics, but told the crowd the governor is going to need help getting his ambitious budget passed in the legislature, and urged the crowd to provide that help. The Beshear budget is dependent largely on expanded gaming in the state, including sports betting and casino gambling.

“Let’s bring our people home and let’s create good jobs so their children can grow up in the mountains and hills of eastern Kentucky,” Adkins said.