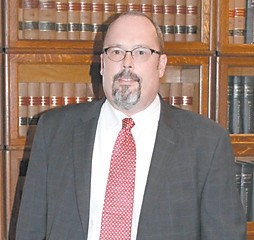 “I am pleased to appoint Mr. Craft as Circuit Judge for the 47th Judicial Circuit,” said Bevin. “His experience in serving his fellow citizens is exemplary and demonstrates the type of commitment needed to succeed in this important position.”

For 21 years, Craft has had a private law practice in Whitesburg. He is a 1986 graduate of Whitesburg High School. In 1990, Craft was graduated from the University of Kentucky with a Bachelor of Arts and from Western Michigan University Thomas M. Cooley School of Law in 1994.

“I would like to thank Gov. Bevin for his confidence in appointing me as the next Circuit Judge of Letcher County and I look forward to serving the citizens of my community in that role,” said Craft.

Craft served as the assistant Letcher County attorney from 1994 to 1998. He was elected president of the Letcher Bar Association in 1995 and currently holds that position.

Craft is the son of James W. Craft and Mahala Frazier. He is married to the former Kimberly Collier from Eolia. They have two children, Rebecca Cook and James W. Craft, III. Rebecca Cook, and her husband, Calviston Cook, have one child, Rhiannon. Rebecca Cook is a dentist at Mountain Comprehensive Health Corporation.

James Craft III is a sophomore at the University of Kentucky.

The Judicial Nominating Commission ( JNC) recommended Craft, Harold D. Bolling of Whitesburg, and Darrell Hall of Whitesburg as nominees eligible to serve as the temporary judge until an election is held in November. Craft and Hall both filed to run for Letcher Circuit judge in January.

The Circuit Court judicial seat became vacant after Justice Samuel T. Wright III was sworn in as a Supreme Court justice in November.