Governors say they will push for clean coal 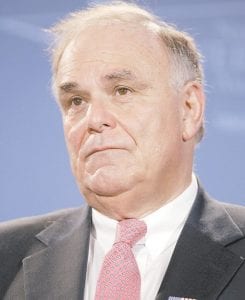 Governors pushing alternative energy development are not shying from coal, a major culprit in global warming but also a homegrown energy source and an economic lifeline for many states.

Leaders of coal-rich states say clean-coal technology is a must. Governors from states without coal want more evidence the technology works.

Energy was at the top of the agenda at the governors’ annual winter meeting. The group’s new clean energy initiative seeks to promote renewable fuels such as ethanol and biodiesel and reducing greenhouse gas emissions.

“Next-generation coal is going to need to continue to be part of our energy future for this country,” said Republican Gov. Tim Pawlenty, chairman of the National Governors Association.

“It is abundant, it is available, it is Americanized in the sense that we control the supply,” he said Feb. 23. “We would be incomplete and doing a disservice to the debate and the ultimate policy direction that we’re going to take if we don’t envision coal being part of that.”

Next-generation coal typically refers to capturing and somehow sequestering or storing the carbon that coal produces. It also envisions reducing or eliminating emissions as coal is burned.

Pawlenty has embraced renewable fuels such as corn-based ethanol and conservation, but he also promotes clean-coal technology.

Such technology is a rallying cry for many coal-producing states. They say it is possible to continue relying on the fossil fuel while minimizing its impact on the environment.

“Coal states would be back in business big time and the economies would flourish,” said Rendell, the association’s vice chairman.

Gov. John Baldacci, a Democrat, needs to hear more before he would include clean-coal technology among the promising energy ideas for the country. His state promotes renewable energy produced through wind, solar and even tides.

Proponents say all energy sources have their problems. The key, says Gov. Brian Schweitzer, a Democrat, is a national energy policy with many options and sources.

That is important because electricity demand will increase in the future. For instance, Schweitzer predicted that 10 years from now a significant number of cars will be plug-in hybrid vehicles, which will require more power plants, not fewer.

Coal “has a CO2 problem, wind has a reliability problem, solar has a price problem, nukes have a price and radiation problem,” Schweitzer said. “So all of those technologies have opportunities. but they all have problems – coal’s no different.”

He added, “What I can say about coal, is we have it. We have it in a greater supply than anyplace else on the planet.”

Doyle, the Wisconsin governor, said the emerging consensus is a mix of approaches. He said the state’s reliance on coal for electricity will decline but definitely not disappear.