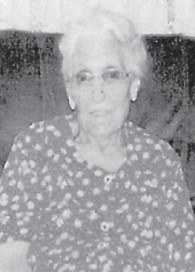 Gracie Mae Caudill, 97, died March 8 at her home in Blackey.

A daughter of the late William Riley and Polly Ann Dixon Back, she was the widow of Bill Caudill. She was also preceded in death by a son, the late Phillip Maurice Caudill; three brothers, Custer Back, Vyron Back and Emory Back; three sisters, Carrie Roberts, Vivian Branson and Bertie Miller; three grandsons, and a great-grandson.

Mrs. Caudill was the Blackey correspondent for The Mountain Eagle during the 1980s and 1990s, and was a member of Little Ruby Church.

Funeral services were held March 11 at Little Ruby Church. Burial was in the Mose Ison Cemetery at Blackey.