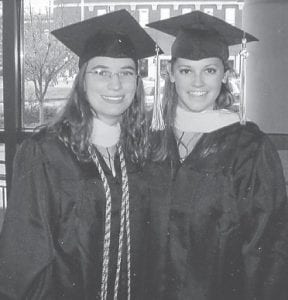 Karri Crouse and Keisha Gayheart were graduated in December from Eastern Kentucky University with master’s degrees in occupational therapy. Crouse is the daughter of Joseph and Suette Crouse of Cornettsville, and the granddaughter of Gonnie Griffith of Hallie. Gayheart is the daughter of Aggie Gayheart and Keith Gayheart, both of Knott County, and the stepdaughter of Sherry Gayheart. Both are now doing their required fieldwork, Crouse in Hazard and Gayheart in Tampa, Fla. The two are 2004 graduates of Letcher High School.