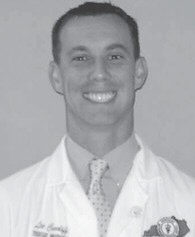 Dr. Cundiff was valedictorian of his class and received the 2007 American College of Veterinary Surgeons Award for large animal surgery. He was also honored with the R.D. Horne Orthopedic Surgery award and inducted into the Rho Chapter of Phi Zeta (The Honorary Society of Veterinary Medicine).

Cundiff will be practicing in Versailles at Crossroad Veterinary Clinic. He is the son of Ron and Diann Cundiff, and is the grandson of Inez Hammonds Underwood and the late Paul Underwood, and the great grandson of the late Corbitt and Elsie Hammonds.