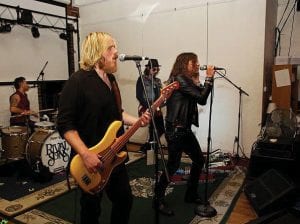 The Rival Sons, a rock band based in California, were photographed on the stage of Summit City in Whitesburg on August 29, 2013. The band has been nominated for two Grammy Awards, for Best Rock Album and Best Rock Performance. (Photo by Thomas Biggs)

A rock band and a country music singer-songwriter who performed in Whitesburg on the road to the top of their professions have been nominated for 2020 Grammy Awards.

Rival Sons, who first performed in Whitesburg on August 29, 2013 before a packed house at Summit City, is nominated for Best Rock Album, Feral Roots, and for Best Rock Performance for the album track “Too Bad.” Feral Roots, the band’s fifth album and first for Atlantic Records, was recorded at the legendary Muscle Shoals Sound Studios in Alabama during April and May of 2018. On May 1 and 2 of that year, Rival Sons kicked off a short U.S. tour by playing two dates at the Appalshop Theater in Whitesburg.

Tyler Childers, 28, is nominated for the 2020 Grammy for Best Country Solo Performance for his song “All Your’n” from his third album, Country Squire, which rose to the top of the Billboard Top County Albums chart after its release in August.

Like Rival Sons, Childers has also performed at Appalshop Theater.

Both shows were promoted by Greg Napier of Hazard after he rented the theater. Country Squire was co-produced by country musician Sturgill Simpson, an eastern Kentucky native whom Napier also brought to Summit City and Appalshop Theater when Simpson was still a rising star.

In addition to Rival Sons and Childers, other new artists or first-time nominees drew the attention of the Recording Academy, as Lizzo, Billie Eilish and Lil Nas X led in nominations.

Lizzo is in first place, scoring eight bids Wednesday for her fun, positive rap-pop style that has made her not only the year’s top new act, but arguably the year’s most successful musician.

She and Eilish — who created her best-selling debut album with her brother Finneas at their home studio — each earned nominations in the top four categories: album, song and record of the year, along with best new artist. Lil Nas X, who burst onto music charts with the country-trap anthem “Old Town Road,” earned nominations for album, record and song of the year.

“You just couldn’t ignore the contribution that Lizzo’s brought, or Lil Nas, and the conversation he and I have been opening up about country music,” said Yola. “And obviously Billie, she’s killing it.

“I find it really hard to believe that I was awake — that it was a real thing. It’s such a hard category to get into,” she added.

H.E.R., who scored five nominations at last year’s Grammys, including a bid for best new artist, returns this year with five more nominations. She won two awards in the R&B categories earlier this year and said she’s not sure what advice to offer the new acts who are dominating in Grammy nominations.

“I don’t even know if I can give advice because everything felt so surreal to me. I was just thankful, and I know the nominations itself is just a stamp on all the hard work,” she said. “It solidifies that, like, ‘Wow, I really made it to even be named among these artists. It’s just a good feeling.”

Yola, who spoke from Germany where she was performing Wednesday, said she couldn’t stop crying after getting the good news. Her other nominations include best American Roots performance and best American Roots song for “Faraway Look,” as well as best Americana album for “Walk Through Fire,” which was produced by Dan Auerbach of the Black Keys.

“I’m an album-maker more than a person that focuses on singles, so that’s just really meaningful,” she said.

Creating an album instead of focusing on singles is also important to H.E.R., who is returning to the 2020 Grammys with her second nomination for album of the year.

“I can’t believe it honestly. It’s a big category. It’s like the biggest category,” H.E.R. said in a phone interview from London. “It feels like the first time again.”

She’s got some stiff competition for the show’s big award: Along with Lizzo’s “Cuz I Love You,” Eilish’s “When We All Fall Asleep, Where Do We Go?” and Lil Nas X’s “7,” H.E.R.’s “I Used to Know Her” will compete with Vampire Weekend’s “Father of the Bride,” Ariana Grande’s “Thank U, Next,” Bon Iver’s “I, I” and Lana Del Rey’s “Norman (Expletive) Rockwell!”

The R&B singer-songwriter-guitarist is also up for record and song of the year with “Hard Place.” In song of the year, women dominate with seven of the eight nominations, including Lady Gaga, Eilish, Taylor Swift, Lizzo, Lana Del Rey and Tanya Tucker.

“It’s a beautiful thing,” she said of the women taking over. “Absolutely.”

H.E.R. said the key to her success has been staying true to herself and following whatever sound and style she wants to explore. Her goal, she said, is to be genre-less.