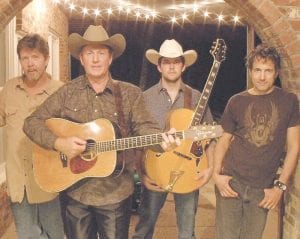 David Ball and his Pioneer Playboys will perform at Linefork Saturday.

Grammy Award winner David Ball will bring his band, The Pioneer Playboys, to the Kingdom Come Community Center at Linefork to perform at the third annual Sugar Grove Opry Mountain Coal Festival on Saturday (May 3). The show will benefi t Ball’s charity, Operation Troop Aid. It starts at 8 p.m., and there is no charge for admission. Festival events begin at 2 p.m.

After selling 3 million copies of his debut record “Thinkin’ Problem,” Ball collaborated with Bob Dylan on “The Songs of Jimmie Rodgers — A Tribute” and won a Grammy for his contribution to the 2005 collection “Beautiful Dreamer – The Songs of Stephen Foster.”

Operation Troop Aid raises money for care package delivered at mail call to the U.S. military around the world and offers bill assistance once the veterans return home. OTA merchandise will be available the night of the show, with 100 percent of the proceeds going back to the charity.