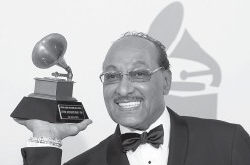 Here’s a look at some of the highlights and lowlights at this year’s Grammy Awards telecast:

WAY TO GO, J-HUD: Jennifer Hudson has a Grammy to go with that Oscar. A week after her return to the national stage at the Super Bowl, the actress-singer picked up the first award of the telecast, Best R&B Album for her namesake solo disc. Hudson’s victory is bittersweet, coming several months after the killings of her mother, brother and nephew. In her acceptance speech, Hudson gushed: “I’m just in awe right now. … I would like to thank my family in heaven and those who are here today.”

JT MAKES EVERYTHING BETTER: Justin Timberlake performing “Let’s Stay Together” alongside Al Green was a top-notch moment. Yeah, Keith Urban and Boyz II Men were somewhere on stage, but all eyes were on Timberlake’s smooth moves and harmonies with Green.

BEST PERFORMANCE AND WORST OUTFIT BY A PREGNANT WOMAN: Rapper M.I.A., who was due to give birth Grammy night, held her own during an allboys’ rap summit on “Swagga Like Us” with Jay-Z, Kanye West, Lil Wayne and T.I. But, oh, that outfit. She exposed her belly in a sheer black top — or was it a dress? — that had a bikini cutout design, strategically covering her chest.

A TRIBUTE TO NEW ORLEANS: Robin Thicke, Lil Wayne and Allen Toussaint did the city justice with their rousing, soulful collaboration, supported by a brass band that had the audience on its feet.

HE JUST WANTS TO DANCE: Radiohead frontman Thom Yorke was way more animated than usual, dancing energetically during the band’s performance of “15 Step.”

AN OVERDUE GRAMMY: The Four Tops, which never won music’s highest honor, finally received their due with a lifetime achievement award; sadly, the group’s lone surviving member, Abdul “Duke” Fakir, could not share it with his three former bandmates. But he did turn out one of the night’s more memorable performances, joined by Smokey Robinson, Ne-Yo and Jamie Foxx in a medley of the band’s greatest hits.