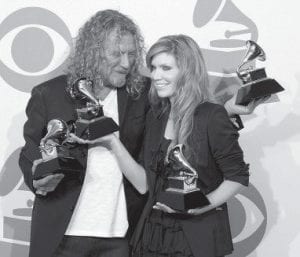 The 51st annual Grammys was an all-ages affair ultimately dominated by a rock legend who took up with a younger bluegrass singer on a whim.

While accepting the Grammy for album of the year, the 37-yearold Krauss — perhaps wanting to remind the audience that Plant’s rock star hadn’t entirely matured — said there’s “never a dull moment” with the 60-year-old singer.

“I’m bewildered,” said Plant. “In the old days we would have called this selling out, but I think it’s a good way to spend a Sunday.”

In a performance-stuffed live broadcast on CBS, the subject of age — and intertwining musical realms — was always close at hand.

Stevie Wonder performed with the Jonas Brothers and even a nine-months pregnant woman — the rapper M.I.A. — hobbled out on the stage to join the dapperly dressed Jay-Z, Kanye West, Lil Wayne and T.I. in a “rap summit” performance of T.I.’s “Swagger Like Us.”

Before the night’s end, Plant and Krauss seemed to be in a three-horse race with Lil Wayne and Coldplay — a trio of acts of wildly different sounds.

Lil Wayne — who led the field with eight nominations — won three awards, including best rap album for “Tha Carter III,” for which he literally hopped on stage to receive. (His tally came to four Grammys if you count his inclusion on “Swagger Like Us,” which won best rap performance by a duo or group.)

Coldplay also took home three awards, including best rock album for “Viva La Vida Or Death And All His Friends.”

“We’ve never had so many Grammys in our life,” said lead singer Chris Martin, perhaps so excited he got confused (they had already won four over the years). “We feel so grateful to be here. I’m going to tear up.”

The Grammys this year offered a CBS telecast without a host and — unexpectedly — without several performers.

Rihanna and Chris Brown, both nominated for awards and scheduled to perform, were absent after the Los Angeles Police Department announced that Brown — who is dating Rihanna — was the subject of an investigation into a felony domestic violence battery from around 12:30 a.m. Sunday.

Brown turned himself into police late Sunday and was released after posting bail. Police booked the 19-year-old R&B singer on suspicion of making a criminal threat.

One of the night’s superior performances, it reflected the comments of producer T. Bone Burnett, who explained while accepting the award for record of the year: “Good things happen out of nowhere.”

“Things happen; you have to be nimble,” said Recording Academy president Neil Portnow after the show, explaining he didn’t know of the absences until Sunday afternoon. “We think to ourselves, we’ve got the greatest musical talent in the world in the same place at the same time.”

The broadcast from the Staples Center in Los Angeles sometimes had the appearance of a bubble. No mention was made of economic troubles across the country or of the music industry’s continuing declining sales. Though download sales are rising, album sales dropped 14 percent last year.

Even the election of Barack Obama was hardly referred to. Following the inauguration and the Super Bowl, it was just about the only major broadcast of late not to feature Bruce Springsteen, whose “Girls in Their Summer Clothes” won for best rock song.

Besides the expected will.i.am mention of Obama (“congratulations,” will.i.am said), Portnow was one of few to mention Obama. He noted musicians had supplied “the soundtrack to history” and that the new president is, after all, a two-time Grammy winner for his readings of his books.

Such awards, though, never make it into the televised broadcast, which this year included awards for only a dozen of the 110 categories.

Among the unseen awards was a posthumous award for George Carlin in the comedy album category for “It’s Bad for Ya,” a recording of his final HBO comedy special. Al Gore — adding to his extensive awards tally — won for the audio book of his “An Inconvenient Truth.”

Instead of focusing on the awards, though, the Recording Academy has increasingly turned the Grammys into an all-star revue, packing the three-and-a-halfhour long show with performance after performance, duet after duet.

Among them: U2 kicking things off with their new single “Get on Your Boots”; Lil Wayne and Allen Toussaint paying tribute to New Orleans; Neil Diamond singing “Sweet Caroline”; Radiohead performing with the University of Southern California marching band; Jay-Z joining Coldplay; a tribute to the Four Tops; and Jennifer Hudson singing a rousing, touching version of “You Pulled Me Through” that left her tearyeyed.

The Grammys also sought to tap into online traffic with official updates on Twitter and Facebook throughout the broadcast.

There were some oddities in the show, too:

Gwyneth Paltrow introduced not the giant British rock group that her husband, Chris Martin, plays in (Coldplay), but the giant British rock band they have often been compared to (Radiohead). Introducing the Al Green performance, Dwayne “The Rock” Johnson curiously declared, “I live for the Grammys.” Katy Perry, again singing her hit “I Kissed a Girl,” performed a choreographed routine while simultaneously appearing to disdain choreographed routines.

A complete list of winners is available at www.grammy.com.

Krauss is the most decorated female artist in Grammy history with 26 awards. Burnett has known Grammy glory before, too, most notably as producer of the best-album winning soundtrack to “O Brother, Where Art Thou?”

Led Zeppelin, which was given a lifetime achievement Grammy in 2005, was never otherwise honored by the Recording Academy.