Gramps vs. The Brat 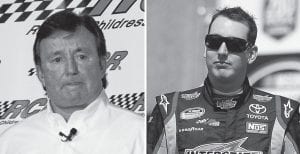 Team owner Richard Childress (left) got into it with Kyle Busch (right) after a Camping World Truck Series race at Kansas earlier this month. (John Clark/NASCAR This Week photo)

Let us consider the strange case of Richard Childress and Kyle Busch.

Childress is the last vestige — full-time, anyway — of old school in NASCAR team ownership. He and Dale Earnhardt made a perfect match. Childress interacted as easily with Bud Moore and Junior Johnson as he now does with Rick Hendrick and Roger Penske. Childress’s success is grounded in the way that he manages to bridge the generations.

The younger Busch brother is Thoroughly Modern Kyle. He is wondrously talented and selfcentered. Sometimes people insist on comparing him to Earnhardt, which is akin to comparing Tim Linecum to Bob Gibson. If Kyle Busch is his generation’s Dale Earnhardt, his generation has really changed.

Though I rather like both men, they obviously do not care for each other.

I like Childress for the qualities described above. This former racer, who built his empire by hand, is about as adept as dealing with the media as anyone I’ve encountered. He has an instinctive knack for handling the various issues that confront his team.

I like Kyle Busch because he isn’t a phony. I may disagree with him. In fact, at times, I may consider him a brat. But he isn’t afraid to be himself, and has the strength of conviction not to worry unduly about what others think. He adds spice to NASCAR. The sport needs a bad boy. The NFL needs the Oakland Raiders (and some even remember them).

As sensible as Childress is, and as closely watched as Kyle Busch is, somehow things went crazy after the Camping World Truck Series race in Kansas. Busch’s Toyota had traded licks with a Childress Chevy, one driven by Joey Coulter, and then Busch had roughed up the kid a bit during the cooldown lap. Busch had roughed up another Childress Chevy, the one assigned to Busch’s foil Kevin Harvick, after a Sprint Cup race at Darlington.

The latter incident apparently led the 65-year-old Childress to mutter, or think, something along the lines of “enough is enough,” probably with at least one epithet added. Apparently, the resulting incident wasn’t caught on tape, so it may be something like the dime novels of the Old West. Though what happened may be exaggerated, it can reliably be reported that Childress, in some form, attacked Busch.

Childress, being Childress, apparently handled the situation that arose after the situation — that being his closed-door meeting with NASCAR officials — with characteristic aplomb, having had time to retrieve his right mind. He paid a fine, and they put him on probation.

Probation. Let me define it for the umpteenth time. In NASCAR, it’s a serious-sounding word that means “nothing.” Here’s one more shred of evidence.

Long before handing down the slap to Childress’s wrist, NASCAR absolved Busch of blame. On race morning at Kansas Speedway, word spread that Busch’s actions “would not affect his probation.”

How can this be so?

Busch was on probation for his role in an incident in which he bumped another car after the Darlington race. How could bumping another, well, truck, after a Kansas race “not affect his probation”?

I’m not after Kyle Busch. I figure he’s got enough of a headache with M&Ms, one of his sponsors (do they melt in your mouth, or do you get belted in the mouth?), without having another meaningless level of probation thrown in.

But the whole reaction makes NASCAR look, yet again, like a mountain.

A mountain of Jell-O.