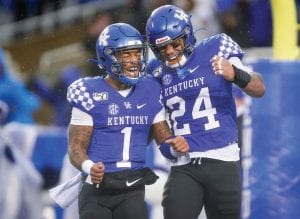 Kentucky quarterback Lynn Bowden Jr. (1) celebrated with running back Christopher Rodriguez Jr. (24) after Rodriguez scored a touchdown during the second half of the Wildcats’ win against Louisville Nov. 30 in Lexington. (AP Photo/Bryan Woolston)

Moments before he spoke to the media after Kentucky’s 45-13 win over rival Louisville last Saturday, Lynn Bowden Jr., hugged Kentucky offensive coordinator Eddie Gran in a show of gratitude and appreciation.

Gran is used to embraces from his players but this one was special, and it came after the Wildcats rushed for a school-record 517 yards rushing, shattering the previous mark of 462 yards set the previous week in a 50-7 rout of Tennessee Martin.

Bowden, the converted wide receiver-quarterback, had a big hand in the feat, rushing for a career-high 284 yards and four touchdowns, which broke or tied six records, including the most rushing yards in history by an SEC quarterback.

In what was no surprise, Bowden was named SEC Offensive Player of the Week Monday, marking the second time this season he has won or shared the honor.

The Wildcats started the season with three losses in their first five games, including three straight after starting quarterback Terry Wilson went down with a season-ending knee injury and Sawyer Smith followed with some nagging injuries. It was then that Kentucky scrapped the passing game in favor of a traditional running attack and put the ball in Bowden’s hands and, in particular, his feet.

“As a play caller and when you have somebody who is as explosive as he is, you can do a lot of things,” Gran said. “He did the read game in high school and it wasn’t going to be a huge transition. The running backs behind him, the offensive line is pretty strong and I just felt like that was our best opportunity to win, until at that point Sawyer was totally full ready to go and for those couple of weeks he wasn’t. That’s why we went 800-miles an hour that way.”

For Gran, putting the ball in Bowden’s hands was a no-brainer and added, “that’s what great players want to do.”

“He said, coach, ‘give me the ball and I’ll be the quarterback and I’ll do whatever I can (to help the team win)’” Gran said. “Whenever we made that decision, that day forward, he has taken it, rolled with it and did an unbelievable job.”

Gran said the past three games have been fun to watch as the Wildcats closed out the regular season with three consecutive victories by rushing for 400 yards or more, starting with the SEC finale at Vanderbilt three weeks ago.

“It’s a testimony to our kids and our coaches,” Gran said. “I think they’ve done a good job of mixing different formations and personnel, different plays and different schemes. You have No. 1 (Bowden) back there and you have a group around him that really just jelled. You have some running backs that run hard and it always starts up front. Our receivers have bought in, along with our tight ends. All they want to do is win.”

The guys in the trenches also have noticed Bowden’s transition into a leader while in the pocket.

“We are one of the positions that doesn’t ever get much (praise) and media doesn’t give us much attention, because it’s always the skill guys, but (Bowden) tells everybody about the ‘Big Blue Wall’ and we appreciate that.”

Kentucky’s march to seven wins has indeed been a team effort.

Keith Taylor is sports editor for Kentucky Today. Reach him at keith.taylor@kentuckytoday.com.