Grand jury gets case against man held in shooting 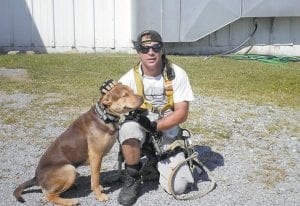 MAN, DOG SHOT TO DEATH — Mark Joseph Sturgill, 48, posed with his dog, Jake, when this photograph was taken recently and posted on Facebook two weeks ago. Both Sturgill and Jake were shot to death in Jenkins on October 7. Samuel Todd Collier, 32, has been held without bond since he was arrested October 7 and charged with murdering Sturgill. The case against Collier has been sent to the Letcher County Grand Jury.

A case involving the shooting deaths of a man and his dog is now in the hands of the Letcher County Grand Jury.

Samuel Todd Collier, 32, was charged with murder on Oct. 7 after he shot and killed his neighbor, 48-year-old Mark Joseph Sturgill. Kentucky State Police say Sturgill was on an evening walk with his dog, Jake, when the shootings occurred.

The case against Collier was sent to the grand jury on Tuesday morning after Collier waived his right to a preliminary hearing. He is being held without bond in the Letcher County Jail.

Police said Collier shot Sturgill in the head around 8:30 p.m. on October 7 while Sturgill was out for a walk with his mixed-breed dog, Jake, at White Wolf Drive. KSP Det. Scotty Sandlin said Collier fired two shots from a small-caliber handgun, killing both Sturgill and the dog.

Sources familiar with the case say that Collier told authorities he was bitten by the dog and was acting in self defense.

“The God’s honest truth is it was over that dog,” Sturgill’s wife Melissa said of her husband’s death. She said she had never seen Collier until after he was arrested the next morning.

Mrs. Sturgill said she and her two teen-aged boys were inside their house last Thursday evening when they heard the two gunshots and hurried outside to find their husband and father lying on the ground. She said 13-year-old Caleb Joseph Sturgill was the first person to reach his father.

Mr. Sturgill, who had worked as a field engineer for Kentucky Educational Television (KET) since 1999, found the dog near a transmitter on top of Buff alo Mountain in Hazard last spring and started feeding it.

Mrs. Sturgill said her husband eventually asked if he could bring the dog home with him because winter weather would make it harder to visit and feed it every day.

“We all fell in love with him and kept him in the house,” Mrs. Sturgill said of Jake. “He took that dog to work with him in that state vehicle. Wherever he went, that dog was with him.”

Mrs. Sturgill said Jake was “the most non-vicious dog” she had been around.

“That dog was the biggest baby ever was,” she said, adding that the dog got along well with the family’s two housecats.

Mr. Sturgill was a member of the Jenkins Volunteer Fire Department and Pine Mountain Search and Rescue.

“He was a great guy,” said Paul Miles, director of Letcher County Emergency Management. “He was very community oriented. He really liked to help people.”

“As with all of our team members, he was an asset to us,” said Miles. “It has been a tragic loss to our team.”

“He was fearless,” said Mrs. Sturgill. “He said that he never knew fear until he had children.”

She said her husband was an “adrenaline junkie” who enjoyed climbing towers, some of which reach heights of 1,000 feet. Local radio stations often called on Mr. Sturgill to climb their radio towers when something went wrong.

Mr. Sturgill worked as a cameraman for WYMT-TV in Hazard for about 10 years before taking a job as cameraman for the Billy Westmoreland fishing show, which enabled him to travel the world. He was a graduate of the Video Technical Institute of Dallas, Texas, and a member of the St. George Catholic Church in Jenkins.

Funeral services for Mr. Sturgill will be held at 1 p.m. today (Wednesday) at the Polly and Craft Funeral Home in Jenkins.