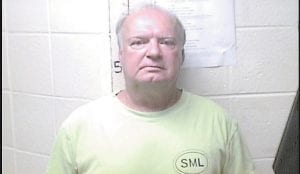 A candidate for Letcher County magistrate in the November election was arrested Tuesday afternoon after being indicted on multiple charges of child pornography, sexual abuse and retaliating against a witness.

Emory Lee “Fudge” Mullins, 61, of 1042 Highway 317, Neon, who won the Democratic nomination for District 3 magistrate in May, is facing a total of 11 counts in three indictments handed up Monday by a Letcher County Grand Jury.

The charges stem from a four month investigation by Kentucky State Police into a complaint filed by the parents of the child, now 8 years old, who contacted police claiming that Mullins had engaged in a long running pattern of improper sexual contact with their daughter.

Mullins was arrested by Fleming- Neon Police on misdemeanor trespassing charges last month after allegedly entered property belonging to the family of the girl after he was told not to by the family.

Mullins now faces two counts of retaliating against a witness for allegedly threatened or engaging in conduct that caused or was intended to cause bodily injury to the father and mother of the girl involved. He is also charged with first-degree sexual abuse of a child less than 12 years old and eight counts of possession of matter portraying sexual performance by a minor involving eight separate young boys.

All the charges are felonies.

According to court records, the mother contacted Jenkins Police Officer Jim Stephens with the complaint on January 27, 2018, and Stephens notified state police. During an interview with the police, the mother told detectives that her 8-year-old daughter had reported an incident of sexual abuse that occurred four years earlier. The mother stated that the child said when she was 4 years old, Mullins took her to vacation Bible school at Fleming Church of God, and on the third trip left her brothers in his van while he took her into a restroom at the Dollar General Store in Neon, and “stripped her.”

The complaint says Mullins pulled down her pants and underwear, and “he started hurting me.” The child’s mother also said Mullins had something dark in his hand that appeared to have a camera lens on it.

In graphic terms, the complaint describes Mullins allegedly sexually abusing the girl and exposing himself to her.

The complaint says that Mullins then told her to “pull your pants up and if you say anything I’ll hurt you worse.”

According to a sworn statement by KSP Det. Scott Caudill, he elected not to interview the girl until he had contacted state Social Services in Letcher County and requested a “forensic interview.” That interview was conducted February 6 at the “Care Cottage” in Hazard, “where they substantiated the claims.”

Police on March 29 obtained a search warrant for Mullins’s home, property, outbuildings, any vehicles on the property, and a Hewlett Packard laptop, an Apple iPad, a Samsung flip phone, a Canon Powershot A2300 camera and a Polaroid disposable camera belonging to Mullins. The search warrant also sought electronic storage devices and the contents of any electronic media, sexually explicit photographs, negatives, slides, magazines, movies, videotapes, audiotapes or other pictures. Police also sought any material related to children that “serves a sexual purpose for a given individual.” Other items related to child sex abuse or pornography were also included in the search warrant as items police wanted.

According to the warrant, the computers and computer media were to be sent to the Kentucky State Police laboratory for examination.

Trooper Anthony Trotter, Jenkins Police Officer James Stephens, and the mother of the girl testified before the grand jury.

The Mountain Eagle has not identified Mullins’s accusers because it would also identify the girl. The Eagle does not identify victims of sexual assault.