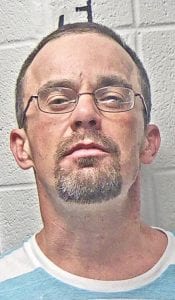 JASON D. GRIFFIE is indicted on charges filed after he allegedly was found in possession of pills in the Letcher County Jail, where he remains an inmate.

Those indicted and the charges against them are:

The indictment says that on or about Dec. 13, 2019, Griffie was in possession of a plastic bag of pills while in the Letcher County Jail. Deputy Jail Elena Hensley testified in the case.

• Donald Collins, 19, of 1111 Pine Creek Road, Mayking, is charged with first-degree fleeing or evading police, second-degree fleeing or evading (on foot), reckless driving, speeding more than 8 miles per hour above the limit, disregarding a stop sign, disregarding traffic control device (traffic light), failure of non-owner operator to maintain insurance, no/ expired registration receipt and failure to register transfer of a vehicle. The charge stems from a pursuit by Kentucky State Police Trooper Wade Adams on Aug. 13, 2019. Adams testified in the case.

The indictment accuses Branham of being in possession of multiple pills and a powdered substance while in the Letcher County Jail on December 13, 2019. Deputy Jailer Elena Hensley testified before the grand jury.

• Thomas Edward Bates, 53, of 517 Millstone Road, Millstone, is charged with failure to wear a seat belt, operating a motor vehicle under the influence of alcohol or drugs (second offense within 10 years), refusal to submit to chemical testing, first-degree criminal possession of a controlled substance (methamphetamine), use/ possession of drug paraphernalia and operating on a suspended/revoked operator’s license.

The grand jury is accusing Bates being found driving under the influence during a traffic stop on Dec. 8, 2019. Kentucky State Police Trooper Wade Adams testified in the case.