Granddaughter insists on timeout for grandmother 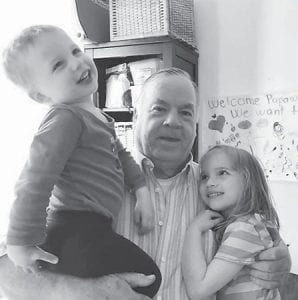 Michael Ison of Kingscreek is pictured with his two, grandchildren, Hudson and Sedona, children of Jeff and Brooke Ison Ruskaup of New York.

As I prepare to write this column, I wonder if our life will ever get back to what we called normal? This thing called coronavirus is such a monster.

I read of so many deaths that it breaks my heart, even though I don’t know the people.

The nursing homes that aren’t notifying the loved ones, then people being buried in mass graves.

It makes me wonder how things are at Letcher Manor Nursing home at Whitesburg area.

My granddaughter Jodi Gray Davidson put me in timeout. I finally gave into Jodi’s insistence, deciding she may just be right about me staying away from people as I am a prime candidate for anything contagious with my health issues.

All my family have really stepped up to the plate to do everything that is possible for me during my timeout.

There are a few posts on Facebook that are so negative. No one is going to stop them from doing what they want, all I can say is go right ahead, don’t listen. It may not be you who gets coronavirus, you may just give it to your grandchildren or to someone you love because you are so stubborn, to put it mildly. 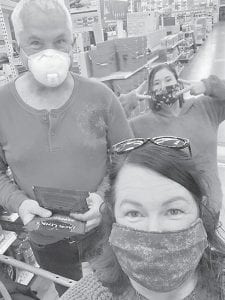 These three masked bandits are Clarence and Kay Gray, and their daughter, Jodi Gray Davidson. Kay Gray is the daughter of Rose Ballard.

You can bet your boots, there’s nothing more that could give me pleasure than to take a one-day trip to see the redbuds. The dogwood trees should be in bloom, along with the azaleas and rhododendrons blooming in yards. It may be too early for several other plants.

Thanks to so many that have sent pictures of the mountains’ beauty for me to see.

Walter Power from Virginia sent a beautiful picture of the redbuds. Bernice Grub sent some from across the road from her house. Amelia Fields has a huge ,glorious pink tree among others in her yard, that I shared. There are too many for me to start mentioning, just know how much I love and appreciate each and every one.

My niece Sue Hall’s daughter April Elswick said that I should come to the mountains, that I would blend right in as there are cars from different states. It would be my luck to be stopped. As I said, others can get by with anything. I may not be that lucky.

I teased about asking my daughter Anna Nottingham about trading cars with me for a day trip, as Anna has Kentucky tags.

Mildred Rogers from Jackson offered to meet me at the Kentucky state line then bring me back.

Seriously, if Cavalry Campus was open, if I could get quarantined there for two weeks. That would be Heaven here on earth for me as long as I had something nutritional to drink, maybe my radio.

Of course I would need a soft blanket, and can’t forget my pjs as I might not be able to go to Walmart.

I would turn the wall heater on, pull up the rocking chair, have the radio playing with my 20-plus year-old cassettes. Oh yes, I would enjoy being confined.

I know that may sound silly to some as I sit here in the privacy of my warm home with all the comforts, talking about wanting to be at the college campus.

The television is always on Hallmark Channel, as I get so tired of the coronavirus updates.

How did Kentucky get so lucky to get Governor Andy Beshear? Oh I know how, as people came to their senses and got rid of slime ball Bevin. Governor Beshear seems to care for the people, not just the money or prestige. Now there are two more in politics they need to get rid of.

I have been thinking about getting his address and asking for special privileges for a get out of timeout pass to head for the mountains, saying the mountains are calling and I must go. It is essential for my wellbeing and sanity.

I could ask for a get out of jail free pass that was used in the game of Monopoly my husband and I played with the children so many years ago. Does anyone remembering playing games with their children before so many technical things came into effect?

My daughter Angie Wiederhold and 13-year-old sidekick Bennie love to put puzzles together. Bennie is very creative in designing different projects and very artistic, when he doesn’t have the Nintendo switch glued to his hands. If only Bennie would apply that brainpower to his schoolwork.

Bennie has been diagnosed with ADHD, whatever that is. I have my own opinion, which isn’t worth a grain of salt! It is “BCTM” — being confined too much.

Bennie has never lived a little boy’s life, as Angie has been disabled for a long time not being able to walk and do a lot of things, then not being able to afford to put him in sports. I get aggravated with Bennie as he doesn’t want to get his hands dirty. To be honest, I would like to roll him in the dirt. Just kidding.

Bennie is 13 years old, and he is brilliant. He also gets bored, except for the Nintendo switch.

It was really disturbing to see all the destruction from the storm that ripped through the mountains. I am just thankful there weren’t injuries. I’m sure the damage put a lot of stress on lots of people who aren’t able to use chainsaws. I really hope there was help for those who couldn’t help themselves.

Bob and Delana Banks and Richard and Libby Smith along with others on Route 7 have been ringing their bells at certain hours of the morning. You can hear it on the computer. It is such a wonderful sound. At times you can see Old Glory waving so proudly, reminding us we are free.

There are several cars that are traveling as the bells are ringing. If that was me passing by I would have to pull over to listen. If you look close enough you can observe a few trees that are so beautiful. Thanks to everyone who is doing this.

Several years I had different varieties of wildflowers in the yard. Jack would always carry a shovel in the trunk of the car, as he knew there would eventually be something for him to dig up for me.

We found a patch of wild bluebells growing in Indiana. Of course Jack dug up some. We did this for a couple of years, for some reason they wouldn’t survive the winter. Finally the bluebells started to flourish, did great for some time ,and then disappeared.

I’ve searched for bluebells, and someone in the mountains showed them growing. I was going to order some off a website on the computer.

Sunday afternoon Scott and Anna were working in their yard. Their property joins in with their neighbor. Anna sent me a picture in private message with a picture of a flower, asking what are these? Through tears I replied, “Wild bluebells that your dad used to find.”

Anna is going to ask the neighbor if she can dig the bluebells up for me. For some time I have been wanting to find wild bluebells.

I teased Anna, saying I could become a wildflower bandit. She replied there are cameras all over. So not to be outdone. I said I would wear a disguise, a mask, and a hoodie.

I will just hope for the neighbor to give permission to Anna. Scott is a policeman, so I can’t be a flower thief!

When Mountain Parkway was first developed, I kept seeing little red, what I thought were wildflowers high on the mountainside. Jack got tired of me saying I wondered what kind of flowers? He pulled the car to the side of the road, climbing up the mountain. When he came to the car, he was half mad, half laughing ,saying don’t you ever mention wildflowers.

What he found were little red plastic flags, as the highway department had marked something off. Of course Jack continued to dig flowers for me. I’m sure there were times he probably wanted to dig a little deeper and wider.

The Mountain Minor movie is being shown on Amazon, free of charge. I asked Dale Farmer how he was making money. Dale replied producing the movie was never about making money.

I know personally Dale spent several thousands of dollars, plus all the time and energy ,along with others who appeared in the movie. Dale cancelled 17 showings of the Mountain Minor movie. It was a huge mistake the Appalshop Theater wouldn’t have it shown there.

I have enjoyed seeing the movie from the beginning of a private showing at Dale’s cabin, on the big screen at movie theaters, and other venues. I finally bought a portable DVD player, since I have packed mine away someplace.

While watching the movie in the privacy of my home, it seemed I enjoyed it more immensely. The brief scene of Mount Olivet Church in Blackey still brings back memories of Dad being there two days after he passed away. Of course Blackey was famous for Coal Miner’s Daughter with Loretta Lynn.

Johnny and Ann Calihan are doing as well as can be expected during home incarceration. At least when the weather was nice they could sit on their deck or get out in the yard.

Their daughter Sue Wagner is still improving from the liver transplant, thank God. Tom and Sue are still looking for a house to buy.

Hello to Les and Pat Wagner and the Wagner family wherever you are.

For those of you in the area of Whitesburg, check out Polly’s Produce.

For anyone interested, I still have a few copies of my book available, The Beauty of a Rose, $15 and $6 shipping.

Thanks to the ones who have read it for the good reviews.

Until next time stay safe.