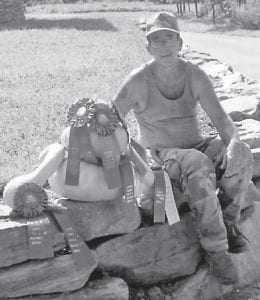 Tim Whitaker of Kingscreek, won four blue ribbons and three white ribbons for his vegetables in the recent Letcher County 4-H vegetable contest. He is the son of Sybil Whitaker of Whitesburg, and the grandson of the late Kidd and Carrie Ingram of Kingscreek.

Hello friends, neighbors and relatives. I hope all had a good week.

I made a mistake in the paper a few weeks ago, and I want to apologize. Brenda Fields Stidham got married to Rick Williams instead of David. So sorry for the confusion.

I really thought his name was David. I meant well and did not realize I made a mistake until I saw it on Facebook. I hope they will forgive me, and hopefully they will have a wonderful life together.

Audrey and Charles Hammonds were in from North Vernon, Ind. Their grandson, Devin Cook, came with them. His home is in North Carolina. He is a real friendly and pleasant guy to be around. His mother, Chris, still needs a liver transplant so keep her in your prayers.

Charles Hammonds has a birthday Aug. 19, as well as their grandson, Jason Dobson. Happy birthday to both of them.

Emily Jones of Greensburg, Ind., had a birthday Aug. 8. She is a daughter of Bill and Agnes Maggard of Columbus, Ind. I hope she had a wonderful day. She is married to Paul Jones and has two sons, Daniel and Dalton.

Carolyn Boggs of Cowan died one year ago on Aug. 16 or 17. She is still missed by her family and friends.

Tiffany Maggard will be 22 years old Aug. 20. Happy birthday to her. She is a daughter of Bill Maggard Jr. and Paula Maggard of Brown County, Ind.

Also, Doug Sturgill of Cowan will be 59 on Aug. 20. Happy birthday, Doug, and hope you and Dana will be doing better health-wise.

Frank Sturgill is in Letcher Manor for a little while. Hope he is doing better. He is married to Carolyn Harvey Sturgill. Keep them in your prayers.

Wanted to say hello to all the gals at Whitesburg Pharmacy at MCHC, and also a big hello to Dr. Bielecki and all the nurses.

My uncle and aunt, Isom and Darlene Fields, have a new great-grandson named Parker. Congratulations to them all. They live in Morristown, Tenn.

Debbie Boggs Pack has been in the hospital. She is home now and doing better.

Jessie Faye Combs has been in the hospital. She is home and doing okay.

Velda Dollarhide Fraley has been home for a couple of weeks. I haven’t seen her yet, but hopefully she is doing okay.

Brack and Linda Sexton will be grandparents again in November. Brett and her husband will be having a boy. Congratulations to all of them. It will give their granddaughter, Delilah, someone to play with. She is Stacy’s daughter and is four years old, I think.

Keep Wayne and Chris Turner in your prayers. Both are having some health issues.

Our son Mike got a new 10×20 building built by the Amish. He is really proud of it.

Archie Fields went back to Pikeville last week for a checkup and got a good report. Hopefully he is finally on the mend.

Eddie and Kathy Wolfe finally have their van on the road again, thanks to Mike Ison and the Auto Clinic at Mayking. It sounds good and runs good.

John Combs is doing better now and thanks everyone for their prayers. He is a real good friend of Charles and Audrey Hammonds, and they spend the nights with him, his son Jay and daughter-in-law Kim, when they are visiting. I hear Kim is an excellent cook.

Audrey came up on Friday to spend the day. We went to see Mike’s building, then we went to spend some time with Irene and Eugene and then went to the graveyard where Audrey’s sister, Barbara, is buried so she could feel some closure since she was unable to attend the funeral for health reasons and bad weather. She felts like Barbara was still at the nursing home.

By the time we got done running, it was time for her to leave. Charles and Devin stayed at John Combs’s house.I missed them but had a really good visit with Audrey.

Agnes Maggard has been in the hospital. She is home now and doing some better. Keep her and Bill in your prayers.

My daughter-in-law Amber Fields has some health issues. Keep her in your prayers.

Micah Osborn turned one year old. She is the daughter of Crystal and Mike Osborn. A happy birthday to her.

I want to say hello to two women whom I have always thought a lot of, Frieda Mc- Cool and Velma Slone. They are both so sweet. Velma has been in the hospital at Hazard and not doing very well. Keep her in prayer.

Carla Maggard is looking at a knee replacement, maybe two. She has severe arthritis in both knees. Keep her in prayer also.

Joe and Tony are having a rough time dealing with both of them having health issues.

Destiny Maggard celebrated her 12th birthday at her aunt’s house. It sounds like she had lots of fun. It was also a pool party.

Keep Margaret, Archie, Irene and Eugene in your prayers.

Well, time to go. Have a good week. Be good to yourself and one another.

Until next time, may God bless.