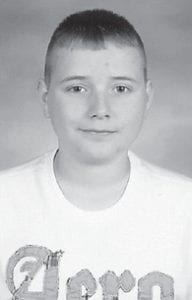 SCHOLAR — Matthew Little was recently named an All- American Scholar by the United States Achievement Academy. He was nominated for the award by Karen Corbett, a guidance counselor at Jenkins High School. He is the son of Stuart and Janet Little of McRoberts, and is a rising sophomore at JHS. His grandparents are Lester and Genevieve Little of McRoberts, and Arnold and Dana Blair of Jeremiah.

Sorry I haven’t written in awhile. I’ve been busy with this and that and then we took a vacation last week so I just didn’t have time to write.

Alma Rose Blair recently spent a week in Lexington visiting with her daughter Christy and her husband and their kids. She enjoyed being with them and as always, the grandchildren keep things lively.

Ila Adams has been to the back specialists in Lexington to see if they could help her hip, leg and back problems. But they said that not much could be done for her pain and discomfort. Jerry, Ellis and Bonita Adams went down with her that day.

Albert Dean Blair recently died after battling cancer. His family took good care of him during his sickness, and many on Blair Branch also helped. He was well loved by those in the neighborhood.

His funeral was held at the Blair Branch Church, and many came out to pay their respects and to support his family

Our sympathy goes out to Shannon and Deanna Jo and the rest of his family.

Also, Una Blair Stickel of Blair Branch died and her services were held at the Blair Branch Old Regular Baptist Church. She had lived in Ohio for years before returning to Blair Branch, and was taken back to Ohio to be buried near her husband.

She was a daughter of the late Watson and Francis Adams Blair. I think she made the 11th death from Blair Branch in the last year or so.

Hopefully, Onis Barnett is feeling better. His breathing has been really bad, and recently he spent time in the hospitals at Whitesburg and Hazard. I saw him out and about at Isom recently, so he may be improving.

Bear sightings have been reported on Blair Branch, Pratt Fork and at Sycamore. They must be moving around in the open more than usual this time of year. Cora Caudill said Ronnie and Joyce Ball saw one by their garage one night, and Bert Reynolds saw one go up the hill between the Imogene Sammon’s home and the old Myrtle and Jr. Caudill property at Jeremiah.

Vada Caudill of Blair Branch will be having a yard sale at their home on Saturday, Aug. 7, and everything will be a bargain price, she says.

Bob Adams of Blair Branch recently spent quite a while in the hospital at Whitesburg, and is now recuperating at Letcher Manor Nursing Home. We hope he is improving and that they can get him back on his feet. Kirk and Sharon have been trying to do all they can for him since Evolena’s death.

This weekend will be the Adams, Thompson and Blair reunion, held on top of the hill at Blair Branch. The vegetable soup dinner will begin at 5:30 p.m., Aug. 6, and church will begin at 6:30 that evening. Aug. 7 will be the reunion supper, beginning at 6 p.m. For more information, call Den Arthur at (419) 399-5338. All are welcome to attend.

Sunday, Bob and I took Bill Adams with us to visit at the nursing home. Bill’s sisters, Hazel Adams and Susie Raglin, and Bob and I, and Hazel’s daughter, Sandy Hall, all sat and visited together in the waiting area near the front of the home. Both Hazel and Susie have recently been in the hospital.

On our way home we drove up Bee Tree Fork to Bill’s mother and father’s cemetery. The road is good up to the hill and Bill was able to walk to their graves.

Ivan Adams had a birthday on July 26 and his family had a dinner and a cake for him. He and Freda have enjoyed having their grandson Daniel of Georgetown visiting most of the summer with them.

Last week Don and Coreen Pridemore, Bob, Kenny Joe, Hunter Banks, Bonita Adams, Liberty and Noah Campbell and I went on vacation to Ocean Isle, N.C. We walked and swam at the beach and rode bikes. Some of us took a deep sea fishing cruise, took in a few antique and secondhand stores, and the boys did putt putt golf, go karts, etc. Kenny Joe spent his time on the fishing pier and came home with a few messes of shark meat. We had a good time and lots of good food and enjoyed being together.

This past Sunday was an odd weekend and it was church time at the Indian Bottom Association building. We had a very good service and closed in prayer. All of us are concerned about Toby Breeding and are keeping him in our prayers.

That’s all for this week. Sorry if I forgot anything else I was supposed to put in.