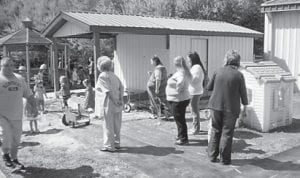 — Jenkins Head Start and Early Head Start celebrated Easter early because of spring break. The Grandparents Appreciation Luncheon and an egg hunt were held. Sixty-two grandparents and several parents attended and the children enjoyed having their grandparents come to school with them.