Grandparents invited to breakfast at school 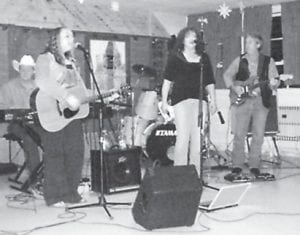 TO PERFORM — Highway 23 will perform at 7 p.m., Sept. 23, on stage at the Mountain Heritage Festival, and at 7 p.m., Sept. 24, at the Hemphill Community Center. The group plays country, classic rock, and Motown music. Band members are Gina Seals-Sparks, Haley Sullivan, Ralph Justice, and Donnie Little.

Hello and a happy autumn to everyone!

September is almost a memory. I do hope everyone is enjoying the weather and all that have complained of it being too hot will keep it up by complaining it is too cold. Hum, sounds like the story of the Three Bears.

As I sit on my porch, the trees on the hillside across the road and hayfield are turning an ugly brown. I have heard that this fall will not be as pretty as before. Maybe God is tired of all the complaining and wickedness of this world.

I had the utmost pleasure of visiting Beechwood Elementary School at Crescent Springs, where three of my grandchildren, the Nottingham Girls as I call them, Sarah, Jessica and Katelyn, attend school. The girls live just down the street from Beechwood, which has kindergarten to 12th grade, so the children that go there never leave until they graduate from high school. It was a special event as grandparents were invited to breakfast.

I arrived at my daughter Anna and Scott’s early, even though I didn’t think I was ever going to make it as there was a wreck close to Ft. Mitchell exit. I stopped at McDonald’s to get some Cina-melts for the kids, then the girls and I proceeded to walk on to school.

Katelyn is six and in the first grade. She took me to the office where I signed in, then we went to her class. When Katelyn and I walked into her classroom, why you would have thought I was royalty as Katelyn’s teacher Elaine Kohlhepp greeted me by saying how excited Katelyn was to have me coming to her class.

Katelyn and I went down to the cafeteria for breakfast along with a few others. We sat at the table with a special couple of grandparents and I failed to get their names. I know I am slipping. Their young grandson’s name is Collier, the grandmother was amazed as Katie named all the children in her class.

I watched my six-yearold granddaughter closely, how her eyes sparkle. After breakfast we went back to the classroom where a welcome was put on by all the students.

Katelyn and a boy were chosen to read the opening. They both did a wonderful job. The class performed several songs, which was wonderful to watch and to listen to.

Katelyn kept doing a silent I love you to me, and once in a while she would point to her eye, then her heart and me, meaning she loved me. I was filled with so much pride that it was hard to hold back the emotion that I was feeling. Katelyn and I took a tour through the art room. In the hallway were the students’ pictures and an essay sort of telling why they loved their grandparent. Katelyn wrote that she loved me because I let her have sleepovers at my house and took her to the park. It was time for me to leave and Katelyn wanted me to stay.

I want to say a special thank you to Miss Kohlhepp for the patience and kindness that she has for her students, as I sat there and observed her actions and every word. As you readers of my column know, I admire teachers, and this one seems to be a prize.

In the classroom there’s something called a Smart Board, which takes the place of a chalkboard that we called a blackboard. Actually, I would have to be able to go to kindergarten to be able to keep up with the knowledge that the first graders have nowadays.

Miss Kohlhepp suggested the students ask the grandparents of their school days. That really made me laugh as I thought of the two-room schoolhouse at Mill Branch, the walk to and from, cold snow in the winter, the icicles I would suck on while holding wrapped in a coat sleeve, or old socks for gloves. The little toilets out back for a bathroom, the big stove for heat in the wintertime. Milk and bread carried in a four-pound lard bucket for lunch, the bucket would eventually start to peel inside and you just spit that part out. sometimes the milk would get a taste to it as it started to, what Mom called, “blanky”, meaning go bad.

I would not trade my childhood days of growing up in Roxana, Ky., Letcher County for any amount of money that is available. The teachers, Anna Stuart, Jessie Wright and Wess Ison, helped to form and mold me to what I have become today.

Actually, I do owe something else, a thanks to God for the intelligence I do have, and the guts to sustain life’s experience.

There’s not a day goes by that I don’t have the urge to pick up the phone to call my dear departed friend Willamae Boggs. I am glad I had the nerve to tell Willamae I loved her, and I know she loved me too.

If I was as pretty as she thought I was I would be a movie star!

If I was as smart as she thought I was, why I would be rich!

I talked to Willamae’s husband Carl Boggs for a little while. Carl is missing his lifelong partner so much.

Their son David Boggs had to get stents put in as he had severe blockage. I hope he is doing better by now.

Jessie Frazier, I have been going through some personal torment the last few weeks I haven’t returned your phone call, nor Alberta Bailey. I apologize for that. Sometimes I draw within myself and can’t talk to anyone.

I haven’t talked to any of my hillbilly friends Ann and Johnny Calihan here locally, so I hope everyone is alright.

Hello to Frick and Frack and their sister Polly Maucher and the whole family. I hope to see you 25, at Letcher County Day, Sept. 25, 300 George Street Harrison, Ohio 11–? Bring a covered dish and drinks, as far as I know there will be music.

Clarence and Arlyn Halcomb, do hope you can attend.

My brother Robert Hall is home from Pikeville Rehab. He still has problems as he isn’t able to walk. Thanks for all the prayers and well wishes for Robert.

My brother Richie and Wanda Hall are doing all right at the present time. With Richie and me that could change any minute as we both seem not to be able to stand up.

Sometimes I get a little upset with Richie and Larry Roark as they are all the time telling what delicious food they have or are eating.

A group of relatives of Wanda’s got together and had a cookout. There’s always enough food to feed an army. Richie and the gang like to “brille” meat over an open fire. I have seen our daddy Clayton Hall do this very thing over the hot coals in the fireplace! Especially a piece of fatback.

Richie is all the time talking about him and Wanda having cooked backbones or neck bones. Around here you don’t see that in a store.

Tandy’s IGA at Aurora, Ind., is owned by my departed little Mountain Mama Alma Whitaker’s son Woody Whitaker and his wife. I may have to go there and see if he knows what I am talking about!

I am not writing anything about my favorite hangout Coon Hunters Club as I was unable to go Friday night, even though I hear I missed some good music, as my favorite musician Marvin Davis played the fiddle. I tease Marvin and say he is always fiddling around!

What I admire most about Marvin Davis is he is a great musician however he doesn’t brag about anything he does.

My leg is still giving me trouble. It won’t heal and it has been six weeks now since I injured it. I am almost finished with my second round of antibiotics.