Grant-Lee Phillips will play here in support of new album 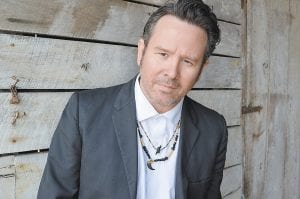 TO PERFORM IN WHITESBURG — Singer-songwriter Grant-Lee Phillips, who fronted the 1990s rock band Grant-Lee Buffalo, is touring in support of his new album, The Narrows, set for release in March. Phillips will peform at Summit City this coming Saturday night. Tickets are $15.

Grant-Lee Phillips, the singer songwriter who was voted Best Male Rock Vocalist by Rolling Stone magazine in 1995, will appear in concert this Saturday (January 23) at Summit City in Whitesburg. Tickets are $15.

Phillips, who led the 1990s alternative band Grant Lee Buffalo, is touring the U.S. in support of his new album, The Narrows, which is scheduled for release March 18 on the Yep Roc Records label. The new album, recorded in the studio of the Black Keys’ Dan Auerbach, will be Phillips’s eighth solo release — most of them critically acclaimed — since Grant Lee Buffalo disbanded in 1999.

Phillips was a lifelong California resident before moving to Nashville in 2013. It was in Nashville that he recorded The Narrows with steel guitarist Russ Pahl, who has performed on many diverse releases by bands and artists including Florida Georgia Line, Kings of Leon, Eric Church, Toby Keith, John Hiatt, Kasey Musgraves. Pahl also appears on former Eagle Don Henley’s latest album, Cass Country. The album also features highly-regarded bassist Lex Price, and drummer Jerry Roe,who has worked with Emmylou Harris and many others and is a grandson of late country music star Jerry Reed.

Phillips said Roe was one of the first people to reach out to him after he moved to Nashville, having met him years before, when Roe told him, “If you ever want to make a record down here, I’m in – and I’ll help you find the right players who’ll get your stuff. But I wouldn’t move here.”

“About a year later,” Phillips recalls, “I rang him up to say that I had ignored half of his advice, but wanted to take him up on the other half.” Roe introduced him to Price, who plays electric and upright bass throughout The Narrows, in addition to a bit of guitar and banjo.

“As a trio, we were off and running,” said Phillips.

Having access to Auerbach’s collection of museum-quality vintage equipment (much of which has also been heard on records by the Black Keys) didn’t hurt either. Cementing The Narrows’ Nashville bona fides, Jerry Roe’s dad Dave, who played bass with Johnny Cash for 11 years, dropped in to add upright to the new album’s gently propulsive “No Mercy In July.”

Thus far, Grant-Lee Phillips’s new home has lived up to its promises.

“True to his word,” Phillips said, “Jerry Roe turned me on to this other Nashville, which I suspected might exist – the kind of creative community I was yearning for. There’s a reason that Bob Dylan and Neil Young were drawn here to make seminal albums. But wherever you’re coming from, music has a way of transcending a lot of boundaries. It needs no passport, but if it did, it would have a stamp from every place on the green earth.”

Phillips cites David Bowie and one of his greatest musical influences, and posted a moving tribute to the late rock star after his death was announced early last week.

“Only days ago he had celebrated his 69th birthday and his latest work, Blackstar,” wrote Phillips. It’s the kind of news that hits you in the gut and leaves you speechless. It can’t be possible. I spent [that] weekend listening to Blackstar, watching the video to ‘Lazarus.’ I thought how incredibly inspiring to witness this artist, this remarkable artist, whose music has been a torch throughout my life — deliver such a potent new work, once again. Lyrical fragments and melodies soon began to lodge themselves in my ear and psyche upon one listen. It’s the same exciting sensation I felt when I first heard Low, Ziggy Stardust, Heroes, Scary Monsters, Hunky Dory and so many others.

“Grant Lee Buffalo had the pleasure to be on a few festival billings with Bowie in Europe in the ‘90s. Before launching into “Jupiter & Teardrop” I felt compelled to admit, ‘I got these chords from David Bowie but they’ve served us well. Thank you David.’ I’m not sure if he heard the shout-out. I’ve heard he was in the wings. But the memory that gnaws at me to this day is that Bowie came by our little dressing trailer the following day, the next show in Belgium. He knocked on the door, introduced himself to Paul and Joey, asked if I was there. I was in catering. So my once in a lifetime opportunity to meet my favorite artist was thwarted by catering. But we watched Bowie from the side of his stage that night and it was indeed his stage. He owned it, transformed it and that memory remains forever.

“I once told journalist Matt Pinfield that there’s music – pop, rock, whatever you want to call it. But then there’s Bowie and he’s a complete world all of his own. I’m just glad to have had him in ours — just all too briefly.”

Phillips recorded a cover of Bowie’s classic tune ‘Ashes to Ashes,’ in 2006 and released it as a single.