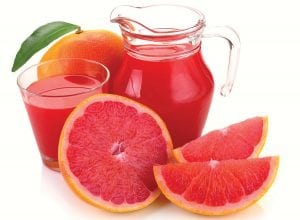 Grapefruits are one of the only citrus strains that came from the West Indies, not Southeast Asia. Grapefruit is a hybrid of a pummelo (citrus grandis) and the sweet orange (citrus sinensis). In 1823, grapefruit made its way to the United States in the form of seeds brought by either Spanish or French settlers to Florida. It is believed that grapefruit were brought to South Texas by visiting Spanish missionaries. Grapefruit gets its name because the fruit grows in bunches, like grapes.

Grapefruit-growing season lasts from October through May; however, since they keep so well in cold storage, you can find grapefruit in stores year-round. With good air circulation, grapefruit will keep at room temperature for a week when stored in a bowl or basket. If you place grapefruit in an airtight bag in the refrigerator’s crisper drawer, it can be stored for up to two months. For the juiciest grapefruit, choose one that has a red blushed skin and feels heavy for its size, with smooth, rather than bumpy, skin.

Besides being a delicious treat, eating grapefruit has numerous health benefits. Grapefruit is an excellent source of vitamins A and C, is low in calories and does not significantly affect blood sugar and insulin levels. Grapefruit also is a powerpacked combination of fi- ber, potassium, lycopene, vitamin C and choline, all of which help to maintain a healthy heart and prevent against developing asthma.

Since grapefruits are made up of 91 percent water and electrolytes, it is a delicious way to prevent dehydration. Drinking grapefruit juice mixed with warm water and honey is a good way to soothe a sore throat and reduce fits of coughing.

Grapefruit can be used in place of oranges or lemons in most dishes that use citrus. My recipes for Texas Grapefruit Tea, and Spicy Shrimp with Grapefruit and Fennel Sauce are two tasty ways to incorporate grapefruit into your daily diet!

In a medium pot, combine juice, honey, cinnamon, allspice and 1/2 cup
water. Bring to a boil over
high heat; strain and discard
solids. Place the strips of
grapefruit zest in the cup for
flavor and garnish.

1. Peel the grapefruit,
remove segments and set
them aside. Squeeze remaining juice out of the
grapefruit into a cup or a
bowl and set aside for the
sauce
2. Combine shrimp, the
2 tablespoons of olive oil
and the red pepper flakes in
a small bowl and set aside.
3. In a 12- to 14-inch
saute pan, heat olive oil
over medium heat until
just smoking. Add shrimp,
fennel, salt and pepper, and
cook until fennel is tender,
about 2 minutes. Add the
onion, garlic, and capers,
and stir for 1 minute.
4. Add in the broth and
grapefruit juice, scraping
the bottom of the pan to incorporate any of the brown
bits on the bottom. Add the
grapefruit segments, herbs
or green onion mixture.
Cook until shrimp is opaque
and slightly white and turns
slightly pink near the tail.
Garnish with fennel fronds.
Serves 4.
Angela Shelf Medearis
is an award-winning children’s author, culinary historian and the author of
seven cookbooks. Her new
cookbook is “The Kitchen
Diva’s Diabetic Cookbook.”