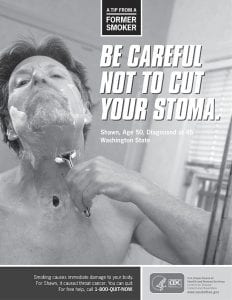 This image provided by the Centers for Disease Control shows Shawn Wright, who had a tracheotomy after being diagnosed with head and neck cancer. The government is trying to shock smokers into quitting with a graphic nationwide advertising campaign. (AP Photo)

A graphic new ad campaign that began this week will try to shock smokers into quitting with the sometimes gruesome stories of people damaged by tobacco products.

The new effort confronts a hard truth: Despite increased tobacco taxes and bans in many public places, the adult smoking rate hasn’t really budged since 2003.

“When we look back on just a few decades to the days of smoking on airplanes and elevators, it can be easy to focus on how far we’ve come,” said Secretary of Health and Human Resources Kathleen Sebelius.

But smoking continues to take a devastating toll on the American public, and the new ads are meant to be “a wake-up call” to smokers who may not truly grasp the dangers that still exist, she added.

The billboards and print, radio and TV ads show people whose smoking resulted in heart surgery, a tracheotomy, lost limbs or paralysis. The $54 million campaign is the largest and starkest anti-smoking push by the Centers for Disease Control and Prevention and its first national advertising effort.

The agency is hoping the spots, which began Monday and will air for at least 12 weeks, will persuade as many as 50,000 Americans to stop smoking.

“This is incredibly important. It’s not every day we release something that will save thousands of lives,” CDC Director Dr. Thomas Frieden said in a telephone interview.

That bold prediction is based on earlier research that found aggressive antismoking campaigns using hard-hitting images sometimes led to decreases in smoking. After decades of decline, the adult smoking rate has stalled at about 20 percent in recent years.

Advocates say it’s important to jolt a weary public that has been listening to government warnings about the dangers of smoking for nearly 50 years.

“There is an urgent need for this media campaign,” Matthew Myers, president of the Campaign for Tobacco Free Kids, said in a statement.

One of the print ads features Shawn Wright from Washington state who had a tracheotomy after being diagnosed with head and neck cancer four years ago. The ad shows the 50-year-old shaving, his razor moving down toward a red gaping hole at the base of his neck that he uses to speak and breathe.

An advertising firm, Arnold Worldwide, found Wright and about a dozen others who developed cancer or other health problems after smoking for the ads.

Federal health agencies have gradually embraced graphic anti-smoking imagery. Last year, the Food and Drug Administration approved nine images to be displayed on cigarette packages. Among them were a man exhaling cigarette smoke through a tracheotomy hole in his throat, and a diseased mouth with what appear to be cancerous lesions.

Last month, a federal judge blocked the requirement that tobacco companies put the images on their packages, saying it was unconstitutional.

Experts say some waves of anti-smoking ads have been hugely successful. Those that aired in the late 1960s helped drive a 10 percent decline in per capita cigarette consumption from 1967 to 1970. And the American Legacy Foundation’s “Truth” ads from the early 2000s deserve substantial credit for a large drop in youth smoking at the time, they say.

The CDC ads are more graphic than spots that have aired nationally before.

The idea behind such ads is to create an image so striking that smokers and would-be smokers will think of it whenever they have an urge to buy a pack of cigarettes, said Glenn Leshner, a University of Missouri researcher who has studied the effectiveness of antismoking ads.

Leshner and his colleagues found that some ads are so disturbing that people reacted by turning away from the message rather than listening. So while spots can shock viewers into paying attention, they also have to encourage people that quitting is possible, he said.

The CDC campaign includes information on a national quit line and offers advice on how to kick the habit, CDC officials said.

Two of the largest tobacco companies issued statements, both acknowledging the health dangers of smoking but neither addressing the CDC ad campaign. “We agree smoking is addictive and causes serious disease and for those who want to avoid the health effects of smoking, the best thing to do is to quit,” said the statement by Richmond, Va.-based Altria Group Inc., owner of Philip Morris USA — the nation’s biggest tobacco company.