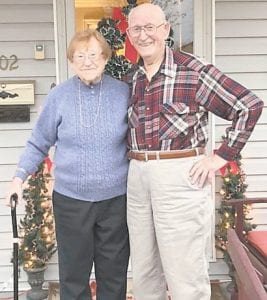 Hello everyone! Are you ready for Mother Nature to show its beautiful colors? There have been a couple of post on Facebook that has shown daffodils blooming, and oh what an amazing sight for my eyes to behold.

My lilac bushes have buds, the poppies are up, and the iris bulbs have new foliage so it won’t be long before grass will need mowing.

My heart and feet are yearning to head for the mountains that will always be home in my heart. You might say I’m sort of a fickle person, as I dearly love the mountains, yet I love this small place where I also call home.

It hurts me deeply when I go back to Roxana, as I look at Amburgey’s store sitting empty. I don’t recall any place for anyone to even get a cold drink or a loaf of bread unless you drive to Whitesburg or Isom. As a child growing up at Roxana I can remember when there were three stores in that small place, Amburgey’s, J.C. Burke’s, then Harim Mitchell stuck one in the middle. Of course I can recall when postage stamps cost all of three cents.

I’ve never understood a comment that was written about someone saying they never felt safe as a child in Roxana. All I can say is I’m thankful as a child growing up I never knew what the word fear meant. When I think back at the times when I was 10 years old and even younger, I walked to Woodrock and Blackey to spend the weekend with my grandmother, Betty Barton, on a Friday evening and came back on Sunday.

You must remember there were no telephones so Mommy couldn’t call to see if I had made it alright. The same way with returning home.

I have walked from Roxana to Caudilltown, which is on the outskirts of Whitesburg, to Grandma Rosa Hall’s. There were many times that a stranger would stop to give me a ride to Whitesburg. All I will say at this day and time, as old as I am there’s no way I would trust anyone to get in a car without knowing who they are.

When my children were young we wouldn’t allow them to walk to Harrison, which is just a short ways from where we lived. Now it isn’t safe to let a child in the yard without supervision. Time sure has changed over the years.

Friday morning, Johnny and Ann Calihan’s daughter Sue Wagner received a long awaited telephone call, telling her to come to UC Hospital in Cincinnati for a liver transplant. The surgery took several hours to perform, and was a success, and at the present time Sue’s vitals are good. Her family is finally allowed to visit Sue. This has been a tiring year or so waiting for Sue to be called for the transplant.

Events in the past several months have taken a toll on Johnny and Ann both. It breaks your heart when you are helpless in situations beyond your control.

I will never forget how Johnny helped me at a time when I had no one to turn to with hauling wood and loaning me a lawn mower until I got a new one.

Not only has Sue’s health been failing, Johnny and Ann’s daughter Carol Dieckman has to received dialysis at home each day.

I am sure you’ve heard the expression when it rains it pours, well in the Calihans’ situation, they need an ark as they have sure had enough.

Ann called me to share a little humor, which left us both laughing. Johnny got up early, got dressed including shoes, then while leaning back in his recliner, said to Ann, “Something is wrong with my legs.” Ann asked him if they were hurting. Then Johnny mentioned again about something wrong, saying his legs were turning the wrong way.

Ann started laughing so hard as she was relaying the conversation to me that she couldn’t hardly talk. She said Johnny had put his gym shoes on the wrong feet, and of course his shoes were pointing out.

Now I laughed even harder, as earlier as I was at my computer, my feet started feeling cold. Without looking I tried to slip my house shoes on. My right foot wouldn’t go into my shoe, I thought it was because it was swollen, but oh no, I was trying to put my right foot into the left shoe. So quit your laughing so you can finish reading.

My thoughts keep returning to Genita Calihan and family in the loss of her son. From what I understand water had been standing on the bridge for sometime, and someone said there was another wreck at the bridge from black ice.

Couldn’t there be some way after all technology there could be drainage?

Oh what am I saying? The roads are horrible with so much blacktop breakage. I remember when I used to travel to my brother Richie and Wanda Hall on Ingram’s Creek, there were spots where the road had given away but you couldn’t see it until you were on top of the breakage, then you had coal trucks going extremely fast.

My ex-husband almost had to lay the van on its side against the mountain to keep a truck from hitting us once.

As you turn on the road from Rt. 7 going towards Campbell Branch Community Center, there’s a spot that is really dangerous, especially if you don’t know the road.

Sunday evening, Daphne Korner, Vickie Power and I set out on an adventure to Leo’s Coffee House, which is held in an older church in Cincinnati, to see Ma Crow & Co. It was a delightful few hours, as I was surprised to see so many friends attending. Dale Farmer and Amy Clay, along with several others, were there.

Ma Crow & Co. draws a good crowd wherever they perform. Ma was celebrating 40 years of playing music. I am proud to say I’ve known Ma for almost 30 years.

Another band performed afterwards, and my ankle was swollen so we left before the last show was finished.

The movie Mountain Minor is still going strong. It was shown in Bloomington, Ind. I made plans to go, that is until I discovered it was over 100 miles away, so I decided not to go, as I didn’t want to drive that far at night.

It will be shown in Ft. Lauderdale, Fla. in the near future. I sure wish Appalshop would have it shown there.

If anyone is interested in a video, check out Mountain Minor on your computer.

Campbell’s Branch Community Center has music every Friday night. There’s been a change in bands, as Sunrise Ridge always performed the second weekend, now they are only playing on the fifth Friday, which isn’t often. Needless to say I am disappointed.

Kentucky Bluegrass Friends, a great band with Fred Campbell on the banjo, is taking their spot. Hello Mike and Marcia Caudill, I hope to see you before long.

Les and Pat Wagner, take care of yourself. It won’t be long until it is gardening time again.

Please be aware of your surroundings and your children, as I read the horrible death of a teenager caused by a wild animal.

It is past time for me to get this on its way. Until next time.