Graveyard shift being listed as ‘probable’ cause of cancer 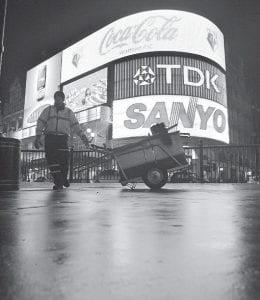 A cleaner was photographed last week working at night at Piccadilly Circus in central London. The International Agency for Research on Cancer is classifying shift work as a “probable” carcinogen. (AP Photo)

Like UV rays and diesel exhaust fumes, working the graveyard shift will soon be listed as a “probable” cause of cancer.

It is a surprising step validating a concept once considered wacky. And it is based on research that finds higher rates of breast and prostate cancer among women and men whose work day starts after dark.

This month, the International Agency for Research on Cancer, the cancer arm of the World Health Organization, is adding overnight shift work as a probable carcinogen.

The higher cancer rates don’t prove working overnight can cause cancer. There may be other factors common among graveyard shift workers that raise their risk for cancer.

However, scientists suspect that overnight work is dangerous because it disrupts the circadian rhythm, the body’s biological clock. The hormone melatonin, which can suppress tumor development, is normally produced at night.

If the graveyard shift theory eventually proves correct, millions of people worldwide could be affected. Experts estimate that nearly 20 percent of the working population in developed countries work night shifts.

Among the first to spot the night shift-cancer connection was Richard Stevens, a cancer epidemiologist and professor at the University of Connecticut Health Center. In 1987, Stevens published a paper suggesting a link between light at night and breast cancer.

Back then, he was trying to figure out why breast cancer incidence suddenly shot up starting in the 1930s in industrialized societies, where nighttime work was considered a hallmark of progress. Most scientists were bewildered by his proposal.

But in recent years, several studies have found that women working at night over many years were indeed more prone to breast cancer. Also, animals that have their light-dark schedules switched develop more cancerous tumors and die earlier.

Some research also suggests that men working at night may have a higher rate of prostate cancer.

Because these studies mostly focused on nurses and airline crews, bigger studies in different populations are needed to confirm or disprove the findings.

There are still plenty of skeptics. And to put the risk in perspective, the “probable carcinogen” tag means that the link between overnight work and cancer is merely plausible.

Among the long list of agents that are listed as “known” carcinogens are alcoholic beverages and birth control pills. Such lists say nothing about exposure amount or length of time or how likely they are to cause cancer.

The American Cancer Society Web site notes that carcinogens do not always cause cancer. The cancer society doesn’t make its own assessments of possible cancer-causing agents, but relies on analyses by the IARC and a U.S. agency.

Still, many doubters of the night shift link may be won over by the IARC’s analysis to be published in the December issue of the journal Lancet Oncology.

“The indications are positive,” said Vincent Cogliano, who heads up the agency’s carcinogen classifications unit. “There was enough of a pattern in people who do shift work to recognize that there’s an increase in cancer, but we can’t rule out the possibility of other factors.”

Melatonin can be taken as a supplement, but experts don’t recommend it long-term, since that could ruin the body’s ability to produce it naturally.

Sleep deprivation may be another factor in cancer risk. People who work at night are not usually able to completely reverse their day and night cycles.

“Night shift people tend to be day shift people who are trying to stay awake at night,” said Mark Rea, director of the Light Research Center at Rensselaer Polytechnic Institute in New York, who is not connected with the IARC analysis.

Not getting enough sleep makes your immune system vulnerable to attack, and less able to fight off potentially cancerous cells.

Confusing your body’s natural rhythm can also lead to a breakdown of other essential tasks. “Timing is very important,” Rea said. Certain processes like cell division and DNA repair happen at regular times.

Even worse than working an overnight shift is flipping between daytime and overnight work.

“The problem is re-setting your body’s clock,” said Aaron Blair, of the United States’ National Cancer Institute, who chaired IARC’s recent meeting on shift work. “If you worked at night and stayed on it, that would be less disruptive than constantly changing shifts.”

Anyone whose light and dark schedule is often disrupted – including frequent long-haul travelers or insomniacs – could theoretically face the same increased cancer risk, Stevens said.

He advises workers to sleep in a darkened room once they get off work. “The balance between light and dark is very important for your body. Just get a dark night’s sleep.”

Meanwhile, scientists are trying to come up with ways to reduce night workers’ cancer risk. And some companies are experimenting with different lighting, seeking a type that doesn’t affect melatonin production.

So far, the color that seems to have the least effect on melatonin is one that few people would enjoy working under: red.

International Agency for Research on Cancer: