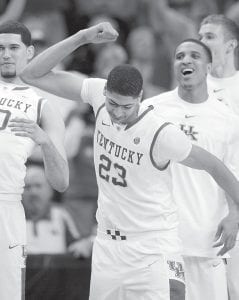 Anthony Davis is one of as many as six underclassmen at Kentucky who could come out early for the NBA draft. Davis says his team “never lost any confidence” during the loss to Vanderbilt, but must now “go back in the gym and play hard in practice and get ready” for the tourney. (AP)

There’s only one No. 1 team in the country, as the selection committee made clear in picking Kentucky as the overall top seed in the NCAA tournament just a few hours after the Wildcats were upset by Vanderbilt in the Southeastern Conference tournament final. No argument there.

Actually, there wasn’t much to scream about on any of the tournament picks, which made for some dull moments among the talking heads on television. They spent all week sharpening their claws, only to find out the selection committee left them few targets to attack.

If anything, the people who pick the field might have done their best work to date. They’ve got a formula that works, and they managed to find a way to tweak it this year to make things even more fun.

How else do you explain a possible meeting of UNLV and Duke for the first time since the Blue Devils upset one of the greatest college teams ever 21 years ago in the Final Four? Even better, Duke and Kentucky could meet in the South final almost 20 years to the day since Christian Laettner hit The Shot to give Duke a thrilling 104-103 win over the Wildcats in the East Regional final.

So Drexel didn’t get in. So what. Nevada didn’t get an invite, either, and the Wolf Pack won 16 games in a row at one point during the season and lost only one conference game before falling in the WAC tournament.

Glittering records just don’t count like they used to. Not with coaches loading up with soft nonconference games, so many so that 112 teams in the country had 20 wins or more.

Besides, there are better things to do than complain. Like look forward to some tournament story lines like these:

KENTUCKY — The Wildcats are so loaded that John Calipari’s biggest worry heading into the postseason was that his players would be so busy worrying about the NBA draft that they would forget to take care of business. That might well have been the case last year when Kentucky was beaten in the national semifinals by Connecticut, and four players were picked in the draft. Complacency also might have set in Sunday, when the Wildcats lost to Vanderbilt and had a 24-game win streak snapped. This year up to six players could be drafted if all the underclassmen come out early, which begs the question: How does Calipari maintain Kentucky’s graduation rate with so many one-and-done players arriving on campus every season?

MISSOURI — There is no quieter top-five team in the country than the Tigers. That’s probably fine with first-year coach Frank Haith, who made the wrong kind of headlines before the season when questions were raised about his ties with a booster at the University of Miami who liked to show players a good time. Missouri benefited from a cupcake schedule early, but the Tigers won 30 games and the Big 12 title. Their fourguard team will cause mismatch problems for anyone.

LAMAR — No, the Cardinals won’t make a run deep into the NCAA tournament, though that doesn’t make them any less fascinating. Lamar hasn’t lost since coach Pat Knight ripped into them for being, among other things, quitters and drug users. Psychologists can debate the method, but no one can debate Lamar’s place in the tournament after winning the Southland Conference tournament. Knight’s father, Bob Knight, called it his best day in college basketball, which almost made Brent Musburger cry on national television. This would be a great feel-good story, except it’s hard to feel good about anything father or son has to say.

SYRACUSE — Bernie Fine won’t be on the bench for this Final Four run, and for a while it looked like Jim Boeheim might not be either. But Boeheim survived the child sex-abuse scandal surrounding his longtime assistant and his team won 31 games to get the No. 1 seed in the East. Assuming yet another scandal — players on previous teams not being suspended for positive drug tests — doesn’t derail the Orangemen, they have a legitimate shot of making the title game for the fourth time in Boeheim’s 36 years in charge.

MICHIGAN STATE — My personal favorite in the tournament, if only because I love the way Tom Izzo coaches. He schedules tough teams and isn’t afraid to take a few hits doing it, something that happened this year in opening losses to Duke and North Carolina. His teams play hard night after night, which makes them especially diffi cult in tournaments, one reason Izzo has led the Spartans to six Final Four appearances in 16 years. Michigan State also has Draymond Green and one of the easier paths in the West region to make another run.

No need to manufacture controversy. And no need to whine about what might have been.

Tim Dahlberg is a national sports columnist for The Associated Press. Write to him at tdahlberg@ ap.org.