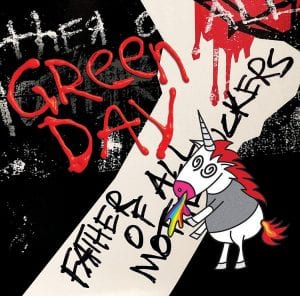 Green Day, “Father of All…” (Reprise/Warner)

Green Day recently caught some people unaware. The trio performed at the NHL’s All-Star Game in St. Louis and singer Billie Joe Armstrong dropped some swear words into the mix. NBC had to bleep the band. What did everyone expect?

The trio is older now but age hasn’t blunted the band’s urgency. Green Day come out of the gate, as always, snarling on their latest release, “Father of All…” They may have pulled back on the official title — if you want to know what the ellipses replace, look at the album cover — but the spirit of punk lives on in the band, even if you’ll detect some strong rockabilly tendencies.

“Father of All…” represents Green Day’s first album in the Donald Trump era and the trio’s angry, anti-establishment voice has been missed. “What a mess because there’s no one to trust,” Armstrong screams in the title track. On “Sugar Youth,” he warns: “All hell is breaking loose.” 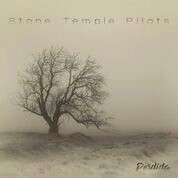 It’s a very lean album, clocking in at just over 26 minutes long. Two of the 10 songs don’t even hit the 2-minute mark. Alienation and drug use run through the album, as do violence and aggressive language. But the vocals sound more distant than when we last heard a crisp urgency to Armstrong delivering such songs as “Bang Bang” in 2016.

The 50s-ish sock hop of “Stab You in the Heart” is undercut by murderous lyrics, while the band even approaches doo-wop in “Meet Me on the Roof.” (By the way, maybe skip the date with Armstrong on the roof: “How high is your low gonna go, girl?”)

On the glam rocker “Oh Yeah,” which samples a tune by Joan Jett and the Blackhearts, the band mocks social media addiction (“Everybody is a star”) and how we’re failing our kids (“Burning books in a bulletproof backpack.”) Bassist Mike Dirnt shines on “Junkies on a High” and drummer Tre Cool propels “Graffitia,” a song that is as close to Bruce Springsteen as Green Day can get.

Perhaps the best song, “Fire, Ready, Aim,” sounds a little like the Hives and it’s a driving scream about daily outrage. The NFL has bought the song and seems to want it to be their equivalent to the NFL’s “Are You Ready for Some Football.” One wonders if they really spent time with the lyrics. “Knock your teeth out/To the ground/You’re a liar,” Armstrong sings. Watching this corporate tie between the NHL and punk will be interesting indeed. Someone’s teeth are going to end up on the ground indeed.

What a strange trip it’s been for fans of Stone Temple Pilots. Two decades ago, they gave us the grunge masterpiece “Plush.” Now they are offering folk songs with flute solos.

That’s not a knock, just a gentle warning. Bands evolve and the Pilots have moved so beyond their sonic beginnings that they’ve followed their muse into a completely different genre. They deserve credit — and listeners.

“Perdida” finds the band in an acoustic frame of mind. No, they’re not making stripped-down covers of their hits (they’ve done that), but 10 brand new songs using no or very little juice. There are cellos, violins, alto sax and something called a Marxophone, a fretless zither.

Acoustic songs are more delicate than electricity-fueled ones and there’s more pressure on singer Jeff Gutt, who has taken over from original frontman Scott Weiland. But these 10 songs show off the musicianship of the band and its member’s versatility, sounding organically acoustic, not reverse-engineered.

“Perdida,” Spanish for “loss,” is a melancholy album, concerned with relationship drift. “Stormy weather/Has been here for too long,” Gutt sings over a beautiful acoustic solo by guitarist Dean DeLeo. There’s lots of images of wind, sky and rain.

“Years” sounds like a track from a ‘70s rom-com, “Miles Away” resembles a violin-led folk song from the Old Country, and “She’s My Queen” is a shimmering song of devotional love with a flutist doing a series of chunky riffs. “Sunburst” is a lighter-than-air, blissed-out confection, while the title track has a nice flamenco feel.

The songwriters — Gutt, De- Leo, and DeLeo’s bass-playing brother Robert — even offer the wordless “I Once Sat at Your Table.” An acoustic instrumental? That wasn’t what many were likely expecting from Stone Temple Pilots. You’ll get used to it.

Graham Norwood, “Out of the Sea” (Self-released)

Graham Norwood often sings of pain and disappointments on his debut album, “Out of the Sea,” but at its conclusion he emerges, if not triumphant, ready to face new challenges.

Norwood’s restraint, resonant songwriting and the elegant, mostly acoustic arrangements, which include strings and a vibraphone, make “Out of the Sea” a rewarding if heart-rendering listen.

After spending his childhood in the Bay Area and later becoming a musical sideman based in New York, Norwood’s career was marked by a long hiatus which included marriage, grad school, stints in Italy and Washington, D.C., divorce and the grave deterioration of his eyesight.

Even if you’re not aware of the biographical details, the transparent, un-self-pitying melancholy of “Out of the Sea” is inescapable.

From the introductory “Hard Times” to closer “Out on the Shore,” the album’s mood swings are minimal and its tone evenly serene. Still, it’s far from 36 minutes of lethargy, as Norwood and his ace backing band, produced by Bryce Goggin, expertly vary the shades of blue.

Further proof of Norwood’s proficiency are presented on the album’s only cover, Tim Hardin’s “It’ll Never Happen Again.” The original was drenched in strings but here the spotlight is on a lamenting pedal steel.

Norwood’s debut shows him to be a skilled songwriter, an expressive yet nuanced singer and a talented guitarist. Here’s hoping the persistent optimism concluding “Out of the Sea” — “You may never be free/But you can swim against the tide” — points the way to a sunnier future and much more great music.