Green nail syndrome is not easy to treat 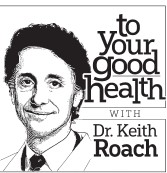 DEAR DR. ROACH: For the past four months, I have had an infection around the cuticle of my right index finger. There is green coloration under the nail near the cuticle, and the nail grew rather deformed. I am a gardener and a homemaker, so I tend to wash my hands often. The urgent-care doctor I saw prescribed clindamycin and mupirocin cream. I also was told to soak my finger twice a day. My family doctor took a culture and, because she did not know if I had a fungus or an infection, prescribed Lamisil and levofloxacin. She also recommended saltwater or peroxide soaks twice daily. The culture showed pseudomonas as the cause of the infection.

With no improvement, I saw an orthopedic doctor. He told me to continue the soaking and the mupirocin cream. On my second visit, he lanced the area between the cuticle and the nail bed. There was improvement, but the symptoms soon return.

The orthopedic doctor spoke of removing the nail as a possible solution to clearing up the infection. Is this my next step, or is there something else I can do? — P.B.

ANSWER: It sounds as though you have the aptly named “green nail syndrome,” which is caused by the bacteria you mention, Pseudomonas aeruginosa, and which often is complicated by a paronychia, an infection along the side of the nail. Your orthopedic surgeon is quite right that sometimes the nail needs to be removed; however, many people can avoid that unpleasant procedure (I had to perform it once) with ciprofloxacin (the best oral antibiotic against pseudomonas), antiseptic soaks and by keeping the hands meticulously dry, using gloves and even using a hairdryer to dry the nails after soaking or cleaning.

DEAR DR. ROACH: I am

67-year-old male who has had mild to moderate psoriasis for the past seven years or so. I have been avoiding the very effective biological drugs because of the scary possible side effects. Instead, I use anti-itch topical creams and lotions, some with cortisone.

In researching the topic, I ran across a treatment called Fumaderm that is available in Germany, but I have never heard of it being used in the U.S. — C.S.

ANSWER: Psoriasis is an inflammatory skin condition that can range from annoying to life-threatening in severity. Psoriasis and its common complication, psoriatic arthritis, together are a highly destructive arthritis that often requires powerful treatment: biologic agents, like adalimumab (Humira) or etanercept (Enbrel). These do have the possibility of serious side effects, such as reactivation of tuberculosis.