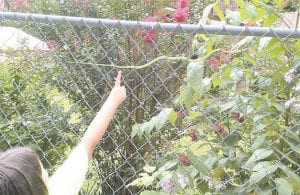 When was the last time you all saw a green snake? It had been almost 30 years since I had seen one and then Mom and I saw one last year in her gladiolas right beside her sidewalk. We watched it for a long time and took a few pictures of it.

Well, lo and behold, last week my granddaughter, Story Eliza, and I were leaving Mom’s and there was a beautiful green snake intertwined in her fence. Of course Story had to tell me how they were nonvenomous and what they ate. She even had to touch it. She loves Wildcrats — a show on PBS that gives all kinds of information about animals. She knows more about some of them than I do and she’s only seven years old. Then again she knows more about a lot of things than I do.

I got a message on Facebook from Rose Ballard and she wanted me to get a picture to Auntie Linda. She said this was taken at the Hemphill Community Center. Rose said, “Linda wanted Lil Willard to take a picture of us together. He was supposed to make her one since she had no computer, and she was so proud that we had a picture taken together. The light made it look like I had purple hair, ha! and she has a touch too.” 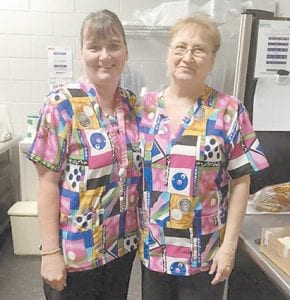 Auntie Linda loved going to the Hemphill Community Center anytime they had something going on. She loved going to the Appalshop for their bluegrass concerts, too. Keep her in your prayers because she is still in Letcher Manor Nursing Home.

My husband has an uncle that also needs your prayers. It is his mom’s brother, Carlos Mullins. They found out he had cancer and in the process of testing him for that, they also found out he had heart problems. So, two weeks ago he had openheart surgery and he is now recovering from that. His aunt, Freedis Mullins Bailey, told me today they will now address the cancer.

Last week the Letcher County Senior Citizen employees had a training day. Debbie Baker wanted me to share a picture of two of the other employees, Sue Miles and Carmen Brock. They showed up for the training dressed in the same scrubs. 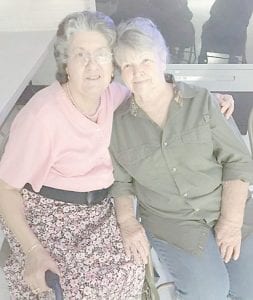 She also told us some sad news. Sue Miles’s term for employment ended. We will surely miss her. They are looking for someone to fill that position. If you are interested, just contact Debbie Baker at the rec center and she can tell you where to go to put in an application.

Did you know if you are a member of the Senior Citizens your membership fees are paid for the rec center? You also qualify for the Farmers Market vouchers. That’s a win-win, or as my grandchildren say, “a no brainer”.

Speaking of my grandchildren, I had to keep my youngest one the other day. My daughter dropped her off to me at Senior Citizens and they were all so smitten with her and she with them. She loved all the attention from everybody and even had to hug Estell Taylor again before we left. She’s a people person for sure.

Charlene Tacket Mason’s granddaughter that sang with The Master’s Harmony last month has now sung solo. I asked her how she had enough nerve to stand up there in front of all those people and sang.

She said, “ Well, we practiced it a billion times.” She said Charlene had even gotten tired of practicing it but she wanted to keep practicing.

I saw the video of her singing on Facebook and she is definitely following in her Mam’s footsteps. I forgot to mention her maternal grandparents are Rob and the late Sharon Watts.

I want to tell you how special the Halberstadt family of the Letcher County Senior Citizens are. Last Friday when we were working out, George McHone told me they had food downstairs. They usually don’t serve lunch on Fridays.

So, we stopped in to check it out and Ronnie and Donnie and their mom Faye had paid for chicken and all the fixings from Lee’s Famous Recipe. They have done this before with pizza. They are very special people and we all appreciate and love them.

Be extra careful on the roads this morning and watch out for all the school buses. It’s hard to believe their summer break is over and it’s time for them to start back to school. My grandchildren aren’t looking forward to it.

So, some other prayer requests are Celesta Richardson Riffe with what they thought were kidney stones but it’s more serious than that. Also, remember our friends Rick Collins with bone cancer and Earle Bone with lung cancer.

Then also, all those who have lost loved ones recently, especially our pastor Bill Jones and his wife Sandy.

It’s hard to believe it will soon be one year since our special friend, Oma Hatton passed away. Her ending will always be our ending, too.

Try to be in church Sunday morning and if your church has services Sunday evening and throughout the week God would want you there then, too.