Greer named to hall of fame 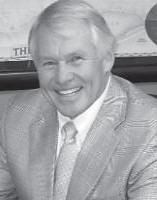 With more than $200 million in annual sales, Greer Companies, of which Greer is chief executive officer, has more than 6,500 employees.

Greer Companies recently opened Coba Cocina in Lexington and is building a Hampton Inn opening near the University of Kentucky.

Greer’s son, Lee, has served as president of Greer Companies since 2002.

Greer is a graduate of Jenkins High School. As a scholarship football player for UK, Greer graduated with a degree in health, physical education and recreation.