Grieving does not have a timetable 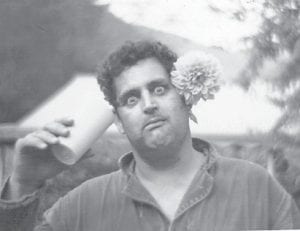 Rose Ballard, Mom wants me to tell you how much she enjoys reading your column. She gets a kick out of listening to, reading about, or talking to anybody about their growing up in hard times. She says you must have grown up like they did at Marlowe.

She said the last time she got to talk to you was at Everidge Funeral Home when they were having your brother’s services. She was with her baby sister, Linda Joyce Hall.

Speaking of Auntie Linda, remember her in your prayers. We are going to try to get there to see her one day this week. From what I heard last week from Robert Wagner’s daughters, he is still having lots of problems with his back and he was at the nursing home last week but they are looking for an alternative because he isn’t showing any signs of improving. He desperately needs our prayers, too.

I saw a quote on Facebook and thought it would be fitting for those that have lost loved ones. It said, “Anyone who thinks there should be a time limit on grieving, evidently hasn’t lost a loved one.” 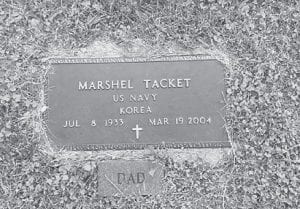 The information on the headstone at Marshel Tacket’s grave includes his service with the U.S. Navy in Korea.

At this time 14 years ago Daddy was having a hard time breathing and was diagnosed with pneumonia. I went to see him one evening and he had a towel over his head and his head over a steaming bowl of water with Vicks Vapor Rub in it.

He said he was trying to break up the tightness that was in his chest. But, he wasn’t having any success coughing anything up. He told me the doctor told him he had pneumonia but he knew that it wasn’t pneumonia.

He went on like this for another week, and on the 18th was admitted to the hospital. We were there that night visiting him and he sat up and told us all kinds of his old jokes that he had told so many times.

We had no earthly idea we would never hear him tell those jokes again, nor that he would have such a hard time that night just breathing. Before my husband and I left he told him once again how he wanted his grave dug. It was an old way of digging a grave that had a ledge so far down. My sister Delores was planning on spending the night with him and the rest of us went home.

During the night they had to call Mom and my sister Lucille to come back because he had gotten worse and was very restless. They were there until way up in the morning before they left to go back home.

He had signed his DNR papers three years earlier and so they were limited on what they could do for him. I came to relieve my sister Delores about 9, and she went to lie down awhile in her car. He was having such a hard time breathing and was talking very little. After an hour or so, Delores came back in and the nurses came to check on him.

They were getting ready to insert a tube down his throat to suction some of the congestion out and I couldn’t stand to watch that, so I left. I was only gone about 10 minutes, but when I stepped off the elevator one of the nurses, Lisa Webb Stansberry, told me if I wanted to see him alive I should get in there right now.

I started crying and she asked if there was anything she could do. I told her to call my sister Charlene and my brother Albert. She said they already had.

I went in and my cousin, Kim Pennington Lucas, and her stepmother, Madonna Pennington, were already in there and he was already gone. I just couldn’t believe it.

We were in that room with him for awhile and then they moved him into a private room because he had signed donor papers for anything that could be donated. The only thing he had was one eye and we had to wait until UK came and got it.

So, we waited in that private room with his sister, Esther Tackett Wagner, and her husband Robert. The pastor from Little Cowan Primitive Baptist and his wife had just so happened to be coming to visit him and so they stayed right there with us until the funeral home came to get his body.

Like I said this has been 14 years ago on the 19th, and it still seems like I can hear him telling jokes and stories when we go down to Mom’s. My husband would always ask him for advice on anything he was planning to do and to this day he will say, “I wonder what Marshel would tell me to do about that?”

So, I certainly agree, grieving doesn’t have a timetable. So, we should always be asking God to help people with the loss of a loved one.

“Mr. Welch had a bunch of kids. Some grown girls and a boy too. We got to know them in a few days. Yvonne picked her out one. Hubert picked him out one but the one he picked was more my size.

“So, I must have talked him out of her because she was a doll. Anyway he ended up with the next one down. She was pretty too. The Welches didn’t have no ugly children. I really fell for this Shirl Welch. It was my first case of puppy love and I thought I was ‘someone.’

“She went to the same school as me and we would write notes to one another. I’d take mine and slip off to myself and redeem. Roy Burres was our teacher then. He chewed tobacco, and I believe he even kept a chew in his mouth while classes was going on.

“He was trying to learn me Roman numerals and I told him if I learned them I never have to use them. Yes you will he said, there are lots of places you will have to be able to know them to read your numbers.

“ I remember many things about Roy Burres and how he taught his class, but this Shirl Welch was my big interest. Her dad made her pull sweet potato vines off the patch one time or help the others pull them. The rest of the bunch was pulling them and she didn’t want me to see her have to help pull them so she wouldn’t. But, her dad put her in the patch in a hurry. Before they left they had a party of some kind going away party maybe. I’m not sure what they call it but me and Shirl were there together.

“We played post office and a game they called Climbing the Cherry Tree. We would step up on the first round of the chair first we would turn the backs of the chairs together. The boy would get on one side and the girl on the other and without using our hands to hold to the chair or the girl we would climb upon the first round me on my chair and her on hers.

“Then we’d lean over the back and kiss. Then without holding on to anything or falling off we could step on another round and kiss again until we were both standing up in the seat of the chair then if we hadn’t missed we could go down kissing as we went. Me and Shirt got to play this game some that night.”

I can just see Daddy doing this. I wish I had listened more to the things he told us about his childhood days, but I thank God he kept this journal so we can get a glimpse of what he was like when he was younger.

When I read back over this entry, I cried just thinking of my daddy and it just seems like all this happened yesterday. He was only 70 years old.

Sorry for the somber article but this is what is on my heart the whole month of March since March 19, 2004.

Remember Oma’s weekly plea, try your best to be in church somewhere this Sunday and I say if your church has services Sunday night and throughout the week God would want you there then, too.