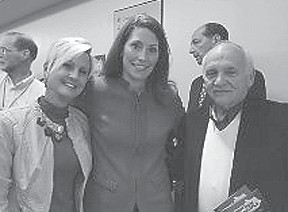 CAMPAIGNING IN MOUNTAINS — Allison L. Grimes brought her campaign for a Senate seat to the Mountain Arts Center in Prestonsburg recently. There was a large turnout for the event, and among those attending the rally were Jenkins Mayor G.C. Kincer and his wife Sherry.

Democrat Alison Lundergan Grimes vowed to press President Barack Obama to “do the right thing” and give coal its rightful place in a national energy policy, as the U.S. Senate candidate took her campaign to the eastern Kentucky last week.

Grimes said she would work to “rein in” federal regulations aimed at mines and coal-fired power plants, and would strive to secure a “meaningful, long-term place for coal” in the nation’s energy mix.

“As your next United States senator, I will work with anyone who sides with Kentucky, and I will oppose anyone who tries to undercut our needs, our resources and our very values,” she said.

Republicans have repeatedly tried to tie Grimes to Obama, a fellow Democrat who has never been popular in Kentucky. Grimes said in Floyd County Jan. 16 that she would press the case for coal to the White House.

“I will call on the president to do the right thing and to develop an energy plan that does not threaten the livelihood of Kentuckians and that gives America the benefit of our coal,” she said.

Grimes was joined by a number of prominent Kentucky Democrats, including state lawmakers and former governors, as she delivered her speech in Prestonsburg.

The Democratic frontrunner also rolled out a detailed jobs plan for Kentucky in her bid to claim the seat held by Senate Minority Leader Mitch McConnell, who is seeking his sixth term this year. McConnell is being challenged in the GOP primary by Louisville businessman Matt Bevin.

Coal mining has emerged as a central issue in the Senate race. McConnell has been a longtime critic of Obama administration policies impacting mining and has had widespread support from the industry over nearly three decades in the Senate. Grimes wants that support from coal and has been aggressively courting industry leaders.

McConnell said last week in Washington that he will force a vote to halt new federal regulations aimed at cutting carbon emissions from coal-fired power plants.

“These are Kentuckians who just want to work, provide for their families, and deliver the type of low-cost energy that attracts more jobs to Kentucky,” he said. “And coal is what allows so many of them to do all that.”

Grimes, Kentucky’s secretary of state, said her top priority if elected would be to help cultivate job growth.